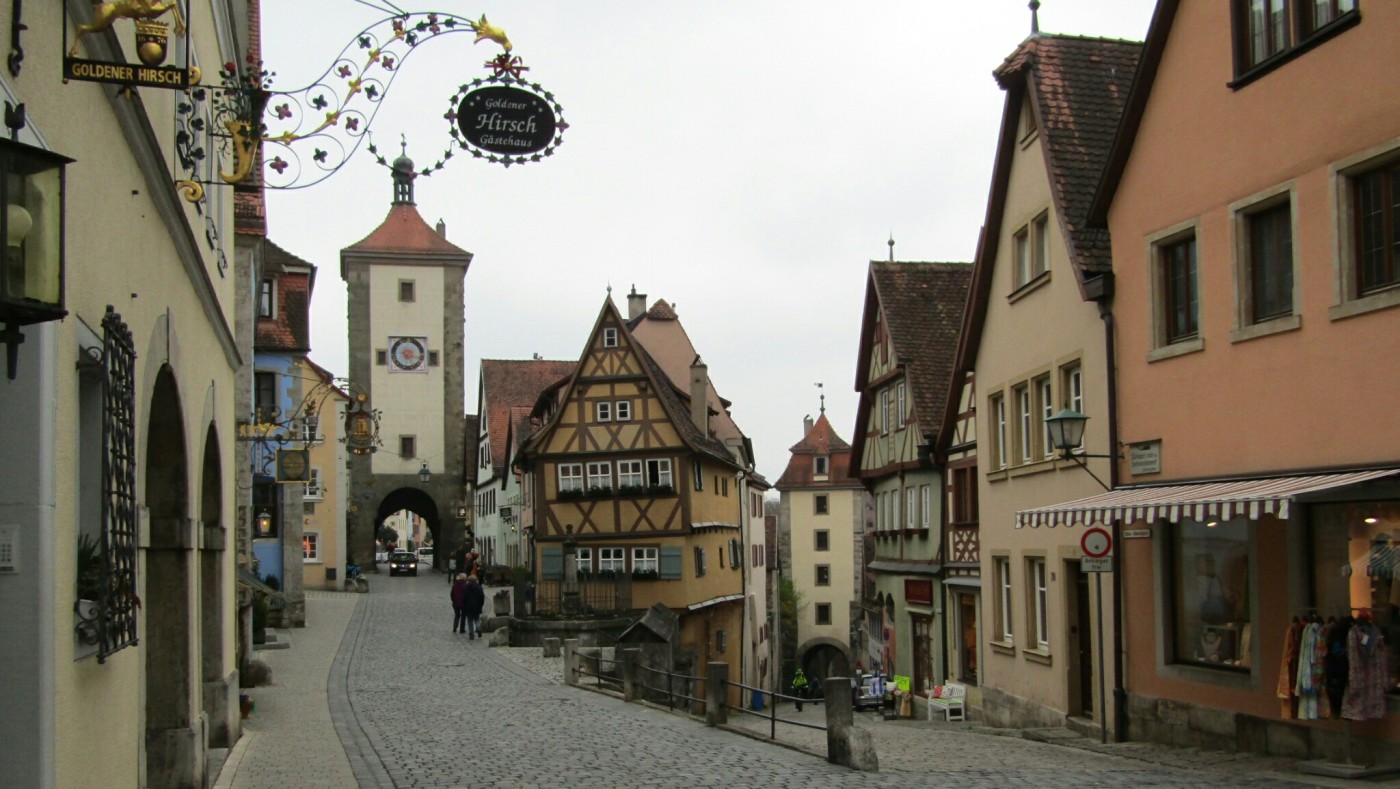 The Sun is shining bright, must be moving on day, just typical. Approx five hours easy Autobahn driving down to Bavaria. Beautiful open scenery that would be constantly up and down if it wasn’t for the multitude of bridges smoothing our way across the valleys. We have been travelling with a bit of ‘blue’ in the toilet cassette between sites to avoid the fees for loos at service stations, because we are tight, yes, but also we never have the right loose change when we are busting ‘to go’. One good thing about the Autobahns in Germany is the parking/picnic areas that appear every mile or so, far better to relax for a brief moment in a semi-quiet picnic area using your own facilities.

We have ventured into new territory today, one that many tourers will already be comfortable with, but not us. We have set off south in a foreign country and have no idea where we are heading. ‘Oh Crikey’. We tried to contact a couple of camping sites yesterday but no reply came back, so we are going to attempt the ‘just turn up’ method. The Boss reckons there are about four sites in our intended area and we will simply hit them in geographical order. We needn’t have worried, the very first site, despite some local road closures/diversions greeted us as if this method was perfectly normal. Remember we are off season so advanced bookings are probably still a requirement in summer weeks.

First impressions of Camping Paradies Franken are good, site review HERE, we are walked to our pitch by a lovely Lady who spoke perfect English and advised best pitch position for sunrise/sunset whilst still giving us free choice of van position, which seems to be the way at numerous European sites. The evening is warm so, after a quick drive to the supermarket for a boot full of wine and beer for about 50p, the Cadac is fired up for action and food and wine are consumed as we watched the sun go down.

Day two is a lazy day, a day of rest, it is Sunday after all. The weather isn’t even good, in fact it’s bloody awful, but The Boss has a couple of trips up his sleeve and we reckon are best for the next two forecasted ‘cloudy’ days. So we rest, short paragraph.

Rothenburg ob der Tauber is picture postcard stunning and a popular tourist attraction on the Romantische Straße (Romantic Road). After five minutes using Google-Translate for all the words on the car park ticket machine we drop in the five euro coins to obtain a ‘day ticket’. In general we are finding car parks and attractions in Germany good or reasonable value, unlike home where the phrases ‘daylight robbery’ and ‘rip off’ are often heard as prices are discovered. We are parked only feet from the medievil City Wall which we are walking along within the minute beneath a pitched narrow roof. 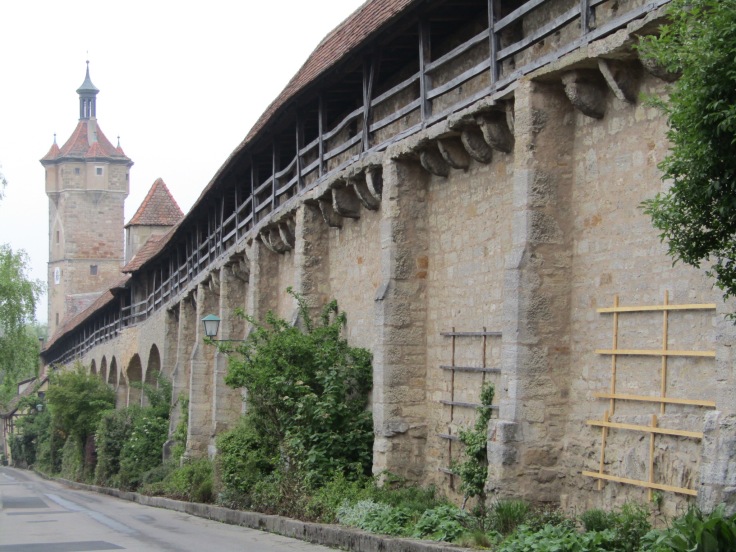 We are definitely in tourist territory now, German is no longer the only language heard and we speak English, of sorts, with some Americans, and properly with an English couple and their daughter touring in a bright pink VW camper van, they were about to start their second year, minimalist or what? 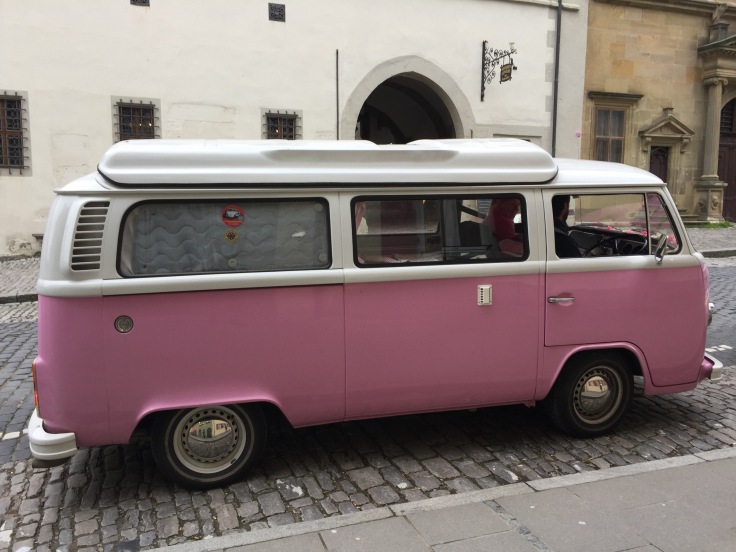 Everything about this medieval town is beautiful, the buildings, the signs, the cobbled streets. Cars are free to drive areas that look too nice for modern life, but after visiting a number of ghost like towns on this trip it added to the hustle and bustle.

Once again, being out of season came to our aid as we were able to freely walk around the souvenir/’tat’ shops without trouble and take photographs without hundreds of tourists giving ‘V’ signs in our way. As we left, we passed a memorial for hundreds of Jews burned alive as they took shelter in the town Castle in the 13th Century, a historical pointer for the following days trip. Historical note, King Edward 1 ordered the removal of all Jews from England in 1290 that lasted over 300 years and England was the first country that required Jews to wear a badge, it colours our history too.

The Boss picked out Nuremburg for our next trip. As we travel around we like to see first hand images we recall in our childhood. As an eight year old, World War Two was thirty years over, but in his mind Adolf Hitler and John Wayne were still fighting it out, mainly due to the limited TV schedules of the 70’s. Stupidly, with hindsight, he once stayed awake in fear of his life when a relative and her German boyfriend baby-sat one evening.

Nuremburg’s enormous Nazi Party Rallies (National Party Conventions) of the 1930’s featured heavily in those childhood images and we discovered that the grounds still exist today. We parked up for free at the entrance to the Dokumentationzentrum (museum), parking the car remains the only stressful part of European touring for us, and paid €5 each for an audiophone self guided tour through a section of the imposing unfinished Reichsparteitagsgelände Kongresshalle that houses exhibits and film archives predominantly following the political and social rise of the Nazi Party/Third Reich.

Without getting politically boring, whilst retrospectively the whole period and movement seems absurd, this place helps you realise how it arose from a perfect storm of various conditions post World War One and the hardships imposed on the German public. Perhaps the most poignant exhibit was the final video of real life experiences where civilians described the subconscious process of being drawn into and supporting a social movement whilst the subtle introduction of the War Machine was growing unnoticed amongst them.

The annual Nuremburg Party Rallies ended when the War started (1939’s ‘Rally of Peace’ was cancelled at short notice), prior to this they were an annual propaganda ‘battery charge’ to the movement attracting over 700,000 to orchestrated events over the period of a week. We were joined today by a number of German school trips and we were genuinely amused that children of all nationalities find forced museum trips boring, no doubt they thought it was that funny bloke with the moustache from 100 years ago, a long way from The Boss hiding under his bed in 1975.

We left the museum and took the short walk to the Zeppelin Fields, a rather weird experience to stand in the footsteps of history looking at the vast arena, now looking ramshackled around the edges and converted into various sport fields, including a motor racing circuit, in the centre. 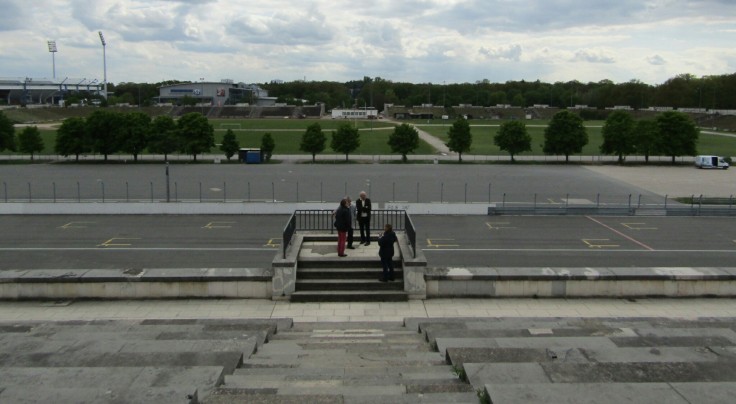 It is both understandable and a shame that the site is falling into disrepair, we get talking to a friendly American couple from Wisconsin and decide in America it would be a Shopping Mall and in the UK it would be a money maker. We intuitively understood why it is as it is today and shared wartime stories passed down by our Fathers/Grandfathers when we were bored school kids as we walk away.

Last full day and the sun is out and warm, hooray, get the dirty washing in the washing machine, the order of the day is drink beer and sit in the sun. The site reviews all mention amazing homemade cakes so we wander to the onsite bar and enjoy a Strawberry/Chocolate Gateaux before returning to Sun and Beer at the caravan. 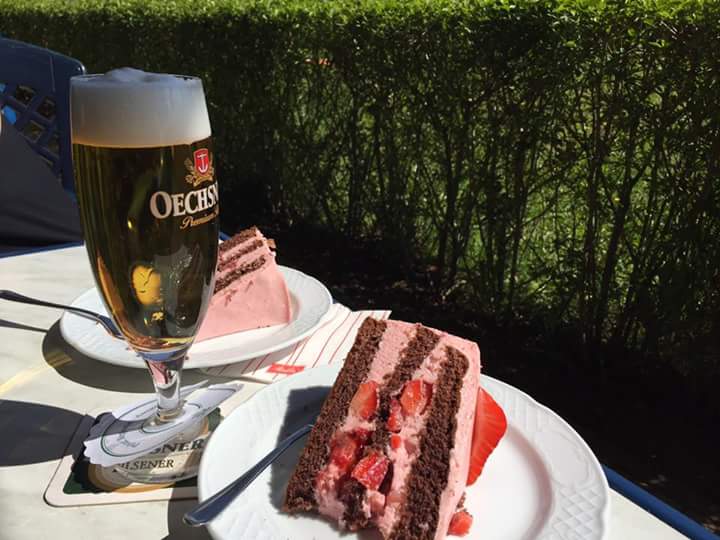 The contents of the fridge are flung in the Cadac for tea, just to lighten the caravan you understand. We were jubious about bringing the Cadac on tour but so far it has cooked every meal, tomorrow it will be cooking on the border with Austria.

One thought on “The Cute and Brute of Germany”