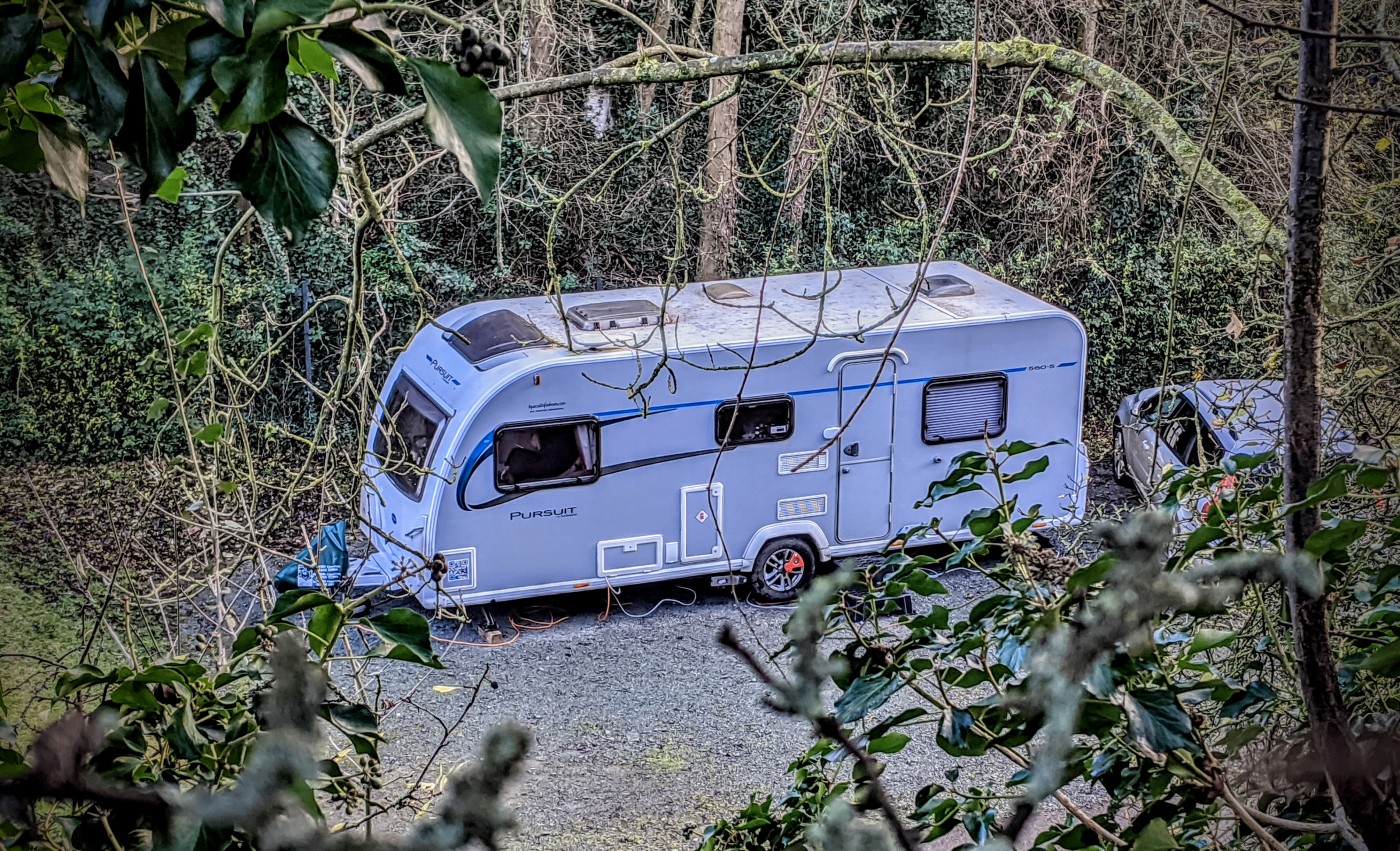 Leaving Ferry Meadows Caravan and Motorhome Club Site early did come with one downside, we had planned to refuel the car. ’80 miles remaining’ the dashboard informed us, down to 75 by the barrier, 65 by the road and ‘so on’ until it settled at 40 by the A1. The Volvo computer had sussed it by then, “You’re towing the caravan aren’t you”. As we are travelling 40 miles, this is not good. A splash and dash fuel stop was required at extortionate rates. A tenner in the tank at excessive A1 rates failed to register on his dash. No amount of cussing would calm his mood, reassuring him that the petrol station hadn’t fleeced him, that fuel did go into the tank, just as he’s threatening to pull into the next petrol station, the car finally registers the fill up. Even the car breathes a sigh of relief as The Boss relaxes.

Pulling on to site we are met by lovely wardens who tell us to “Go for a walk and choose a pitch”. The Site is a web of cul de sacs, dead ends, best to know which pitch your heading to before you get there. We choose a pitch down in a dip and set up in next to no time. Kettle on in less than half an hour. The wind is starting to pick up, our spot, thankfully, is quite sheltered. 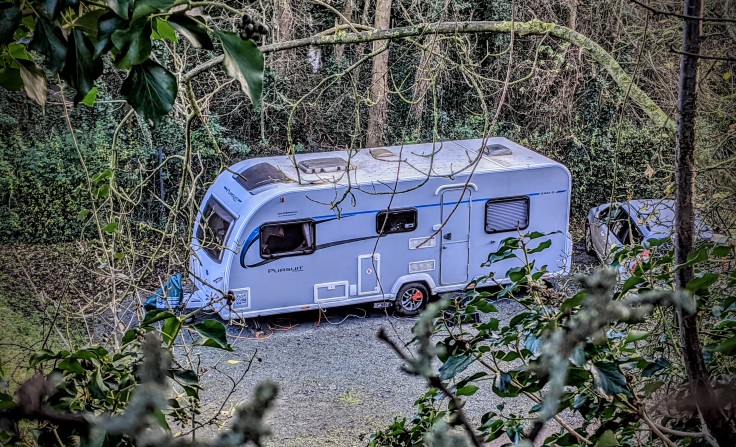 What to do in the area? The weather isn’t good, wet and windy, on and off, so we send a request to our friend, and former Cambridge resident, Richard, who sends a list back pronto, mostly ‘free’ as he knows us well. Standing out on the list was the Cambridge ‘American Cemetery’. Not exactly holiday fair but we find it almost impossible not to pay our respects when we find ourselves standing by the bodies of any personnel who gave their lives in war time.

This cemetery contains 3811 war dead graves and a memorial stone wall inscribed with the names of a further 5127 personnel ‘missing in action’. Predominantly, military personnel killed in the ‘Battle of the Atlantic’ sea convoys or during European Air Bombardments that flew mainly from this area of England. While the Cemetery is an impressive sight, once up close reading people’s names and hometowns you begin to understand how far from home they were and what they did for us.

The personal stories recounted in the visitor centre hit you hard, as do the photographs of the fresh faced military personnel. 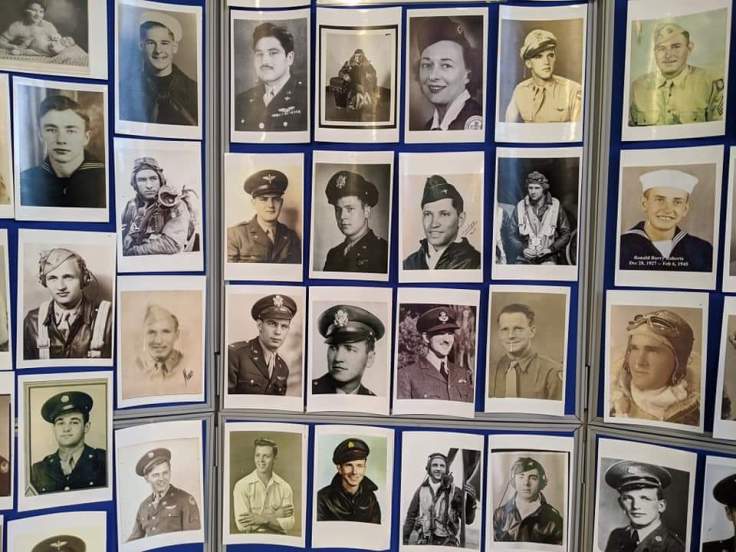 The next days included a couple of National Trust visits. Anglesey Abbey and Wimpole Hall. Once again we adopted our ‘ask stupid questions’ approach and once again found it enhanced our visit massively. 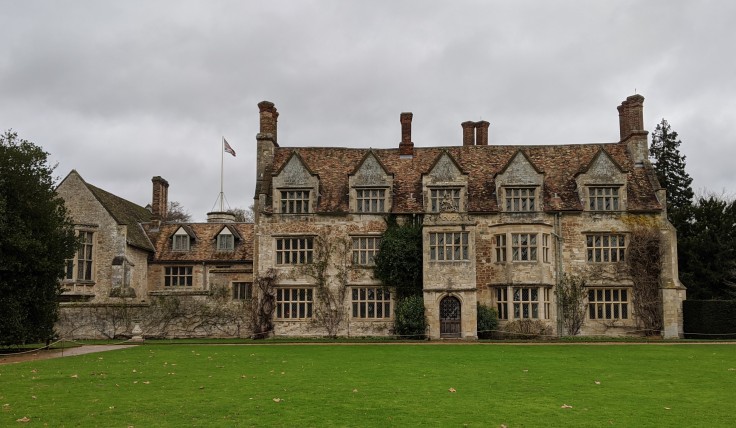 Anglesey Abbey was The Boss’ preference, preserved ‘as it was’ the day Lord Fairhaven died in 1966, the volunteers knew their stuff and we even got to see some Royal graffiti (if you can see it). The Christmas punch and homemade mince pies in the kitchen, cooked by a lovely lady who knew her onions regarding the house and it’s history had me gripped. Talking about how Christmas would’ve been in the kitchen in times gone by. 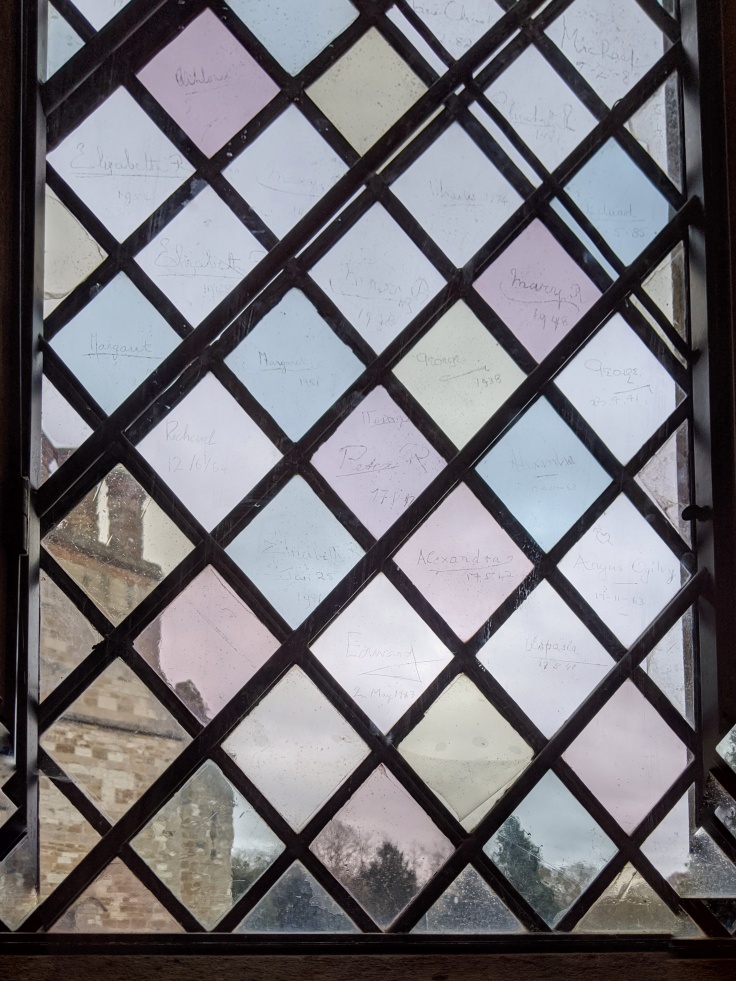 Personally, I preferred the Christmas touches of Wimpole Hall. Give me tinsel, reindeer and Christmas trees and you’ve got me. The house was Christmas dressed to perfection and a steaming, hot chocolate in the cafe at the end was the star on top of the tree for me. 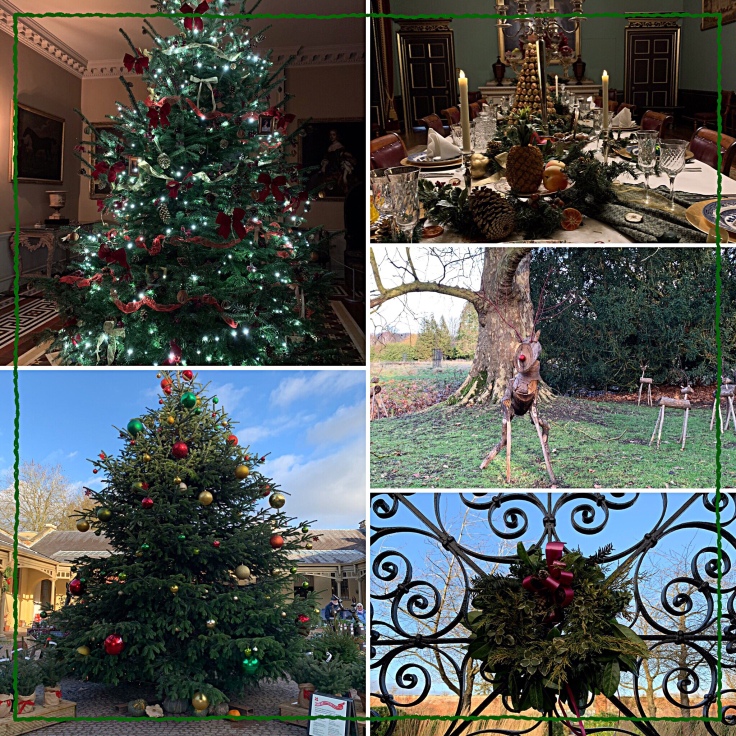 Again, the staff were very knowledgeable, although the life story of one volunteer, a ‘Ten Pound Pom’ was as interesting as the house.

We were joined on our final two days by Aaron and Vicky, Motorhome Chit Chat who have recently collected their new motorhome and decided what better way to spend a weekend than spend a weekend with us. I cooked up a Chilli for the four of us and we swilled it down with copious amounts of beers and wines.

Next day I am encouraged (hijacked) into using public transport again. A trip into Cambridge City centre which The Boss turns into a long hike around ‘The Backs’ for “a better view”. More of a wet and damp, drizzly, let’s dodge the puddles walk. The river was running high and the puddles were deep and impossible to navigate. Mud splashed up the back of my jeans and my desire to have worn wellies had never been stronger. Give me a day of Christmas shopping at this point and I’d’ve snapped your hand off. 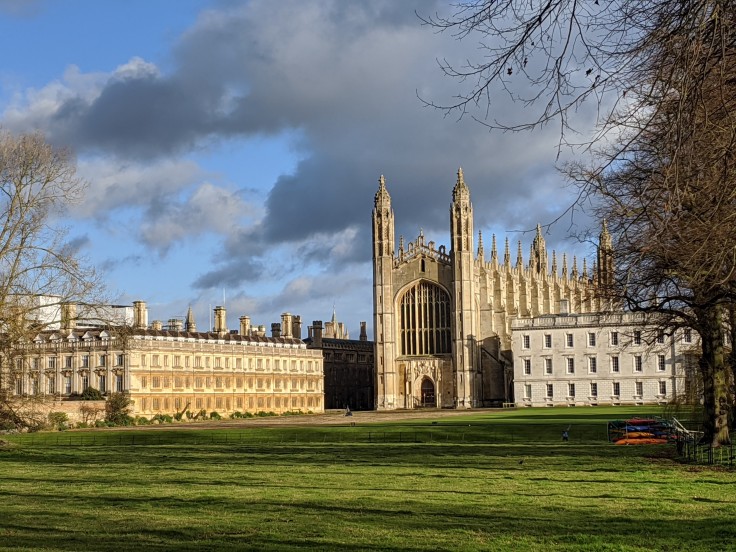 Although it seems a punt on the river is the best way to travel in these parts, looked a bit cold to me … and a bit expensive to The Boss. 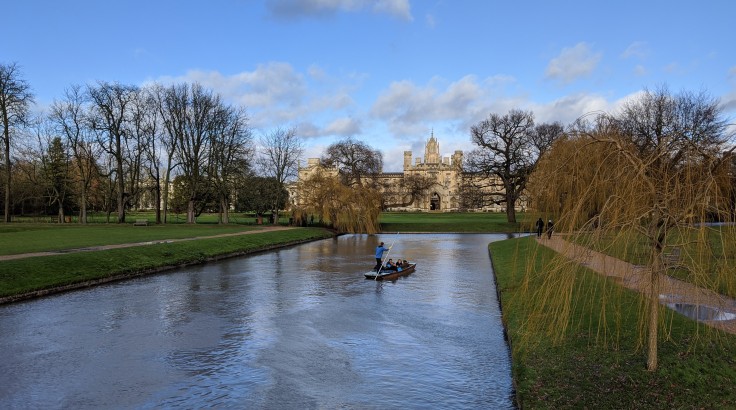 Back to the bus and like the rebels that we are, we sat on the back seat, chatting and planning our evening. A meal booked at the Robin Hood, walkable from the site, cue our stop to get off the bus. The Robin Hood pub. It would be a shame not to check it out ahead of our evening dinner date. In we go, bag a table near the window, whilst the boys deliberate over which beer to try, Vicky and I find it easy, Berry gin and lemonade, didn’t quite appreciate the first one as much as we should have done so we had to try another.

Just over an hour later and we are back, quick lick and a promise, a squirt of perfume, two dogs and a couple of torches, we walk back through the doors into typical Saturday evening pubness. (Another Debraism.) Football on the TV, heathens, the lot of them. We are forced into watching countries I’ve never heard of kick a ball about whilst the Strictly Come Dancing final is on the BBC, men kicking a ball about or Kelvin in his finery and Vicky and I are forced to endure football.

Food consumed and we aim the torches down the dark lane towards the site. The warmth in the new Motorhome of the Chit Chat’s is tonight’s place to rest and reflect on the day. 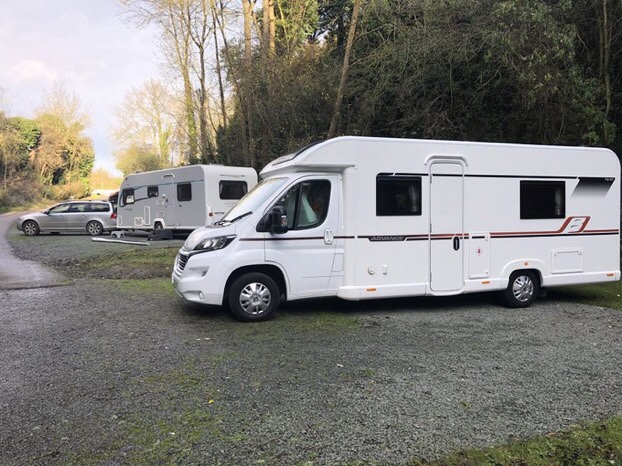 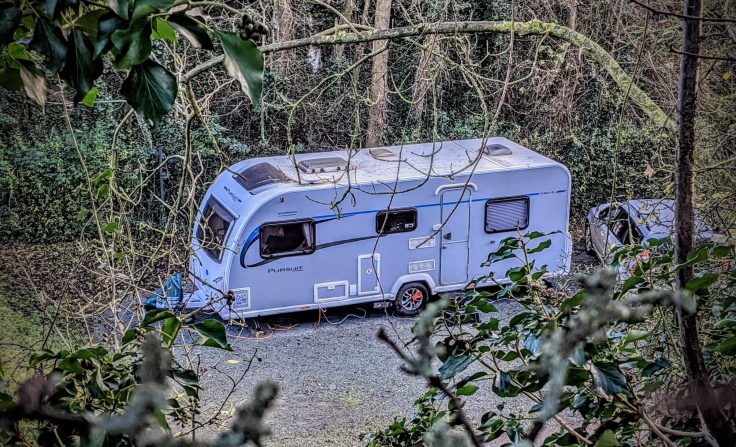