It’s taken me a while to get my act together and put this blog together, my blogging mojo has dipped a bit, I need to try to get it back. It’s a blog I needed to write about an event I’m glad we had the opportunity to attend, in memory of a man, I’m glad to say we knew. First a little bit of background.

August 2013, a small group of Caravanning Twitter friends threw gauntlet to the wind and did everything we told our children not to do, they met up with people off the internet, in their caravans and over a jar or two, they put the world to rights. Little did Trevor, Richard, Allison, Amanda, David and Andrew know, ‘Twitter Camp’ had been born and has been an annual event ever since, slowly growing in numbers year by year. As it evolved, the helm was manned by our good friends, Trev and Rich. Sadly, in August 2018, Trev passed away, leaving a wapping hole in the caravanning community. What of Twitter Camp 2019? Would it happen?

In his memory, some of the original Twitter Camp crew and good friends of Trevor and Richard, pulled together to make sure that it did happen, whilst raising money for Papworth Hospital in Trevor’s memory. I would imagine, it took a lot of slog and hard work and liaising but they pulled it off, and what a weekend it was.

Luckily for us, Twitter Camp 2019 aligns with our weekend off, which just happens to be the end of May Bank Holiday weekend. We work till one O’clock, at this point normally, we throw something down our necks and promptly spend the afternoon snoring. We call this our ‘Jet Lag Afternoon’ where we recharge our batteries. Not today, butty snaffled, tea drunk and into the car heading towards Moreton-in-Marsh were this year’s Twitter Camp is being held. We can’t take the caravan across and join them for the weekend, as working on site means it’s set up for living in and not possible. We are just going to have a few hours across there and then head back. Feel a bit sorry for The Boss as he is in control of the steering wheel for the nearly two hour drive. How on earth we got there as quick as we did I don’t know, I must’ve dropped off.

Arriving at Moreton-in-Marsh Caravan and Motorhome Club Site we see that their small car park is full. We head back out of site and down the road to a lay-by to park the car. Armed with chairs we set off on the trek back to site. We report to reception, then to the evenings event via the toilet block, not for a wee though, Nick and Sarah, our fellow Assistant Wardens from last year just happened to be finishing loo block cleaning. Quick catch up, don’t want to make them late finishing their clean, members are already starting to hover, dancing cross legged, whilst waiting for the ‘Closed for Cleaning’ signs to be taken down. Heading down towards the gathering of ‘Twitteratti’ we find them down one of the sites cul de sacs, a perfect spot for such a meet.

Some of these people we have met in real life before, some are people we have only met on Twitter but over the years have had lots of interaction with. It really is great to be able to finally put faces to names.

A lovely afternoon chatting about everything and anything, Trev really would’ve been in his element with so many people to talk to. An events shelter sits nestled between two caravans, sheltering a table full to bustin’ with raffle prizes, the raffle is due to be drawn tomorrow, I entrust my tickets to a lovely lady that I’ll see next week. Fingers crossed I win something.

As tea time hit us, tummies started to rumble and a hot spot of Cadacs appeared, mountains of salad, burgers, sausages and other bbq goodies magically appeared. The last few years Twitter Camp has been kindly sponsored by Richard at Cover4Caravans and this year was no different, the Twitteratti were fed for the entire event, thanks to the generosity of this very kind company.

Cadacs miraculously, spirited away and cleaned, our own Dave Spikey, vlogger Phil from Lost Weekends took centre stage and encouraged us all into groups for our very own version of Pop Master. Tunes were played, everyone hummed or sang along, artist, song title and year. In good old Ken Bruce style we were one year out on so many occasions.

One of the many lovely things to come out of Twitter Camp 2019 was when a fellow Boltonian and vlogger, Martin from The Caravan Nut came across and said his wife thought she recognised me, a few quick questions to work out if we had a common link, we grew up as children on the same street, played out together and used to get each other’s post due to us both having the same surname. Such a small world. So lovely to meet you again after about 35 years and chat about our families.

The day for us starts to draw to a close as the sun falls behind the trees and the temperature starts to drop. Pretty solar lights adorning vans start to twinkle. We’ve got to think about trekking back to the car and the long drive back to site.

I managed the long trek back to the car, I managed to stay awake on the journey back to site, putting my cushion made by Alison, to mark this year’s Twitter Camp in place, I then struggled to sleep as my mind worked overtime, revelling in love that had surrounded the day. Such a special group of people, all brought together by the power of social media and their love of caravanning. 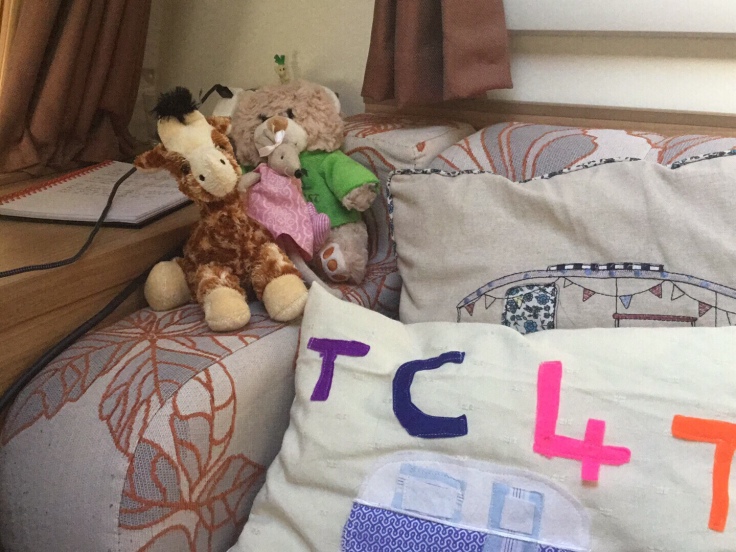 In Trevor’s memory Twitter Camp 2019 raised £524 for Papworth Hospital. I would like to thank everyone who worked hard to pull this event together. You did a special man proud.