Wall to wall beautiful blue skies, little wisps of clouds, sun on our faces and the waves gently lapping on the beach just across from our chosen restaurant for lunch. Destination, Lanzarote.

After eight months of working on the New Forest Centenary Site, cleaning the loos, pruning trees, cutting the grass and trimming hedges, booking people in, waving cheery goodbyes, from the ‘Beast from the East’ to one of the hottest summers I can remember, it was time for us. Time for our holiday. We had four or so weeks of caravan time, but in the mizzle and drizzle of winter. The skies welcomed the clouds and turned grey, temperatures dropped. I’d missed my summer holiday season. Time to pack the case and head for warmer climes for a while.

After a bit of cajoling, I managed to get ‘The Boss’ to succumb to letting me take a suitcase, just the one mind, seats on EasyJet are cheaper than chucking a case in the hold.

We’ve been here now just over a week and the tan is coming along nicely. Sitting outside the restaurant, looking at the beach, we feel a walk coming on. Just to aid digestion of course.

His Version – Getting Deb to even start a walk is a victory in itself, so if I have a long walk planned I have to approach it with much deceit and masked intentions, “Let’s wander this way for a while and see how it goes” rather than “Just a quick six miles Love”.

Her Version – A quick walk just to aid digestion, to me suggests a meander amongst the bars and tat shops, people watching, catching a few rays and drumming up a few steps on my Fitbit. Not that having a Fitbit has done me any good, in fact since I got it I’ve put on two stone! Should I send it back? Could be faulty.

His Version – After a mere five minutes She wants a wee, I know her game, She wants to head back, “We may as well carry on to the public loos ahead, it’s shorter than the walk back”. We are only about a mile away from this comment being true and her realising it too.

Her Version – A burger and a ‘cheap as chips’ large beer all for the princely sum of 5€ has left me feeling quite full and in desperate need of another piddle. Why aren’t there ever any public toilets around when you want one. Reluctant to spend another 1.50€ on yet another large beer, just so as I can use their loo, I tell The Boss my predicament and tell him to keep his eyes open for loos on the beach. There’s some just up here he tells me, my little legs plod on quite quickly now in my desperation.

His Version – Eventually the toilet is reached. Only two urinals, the man to my right must have a small willy, he is twisted sideways away from me with his rucksack in between my face and view of my own todger (it was a very large rucksack), I hoped I aimed well, he hoped I hadn’t rifled his rucksack – or seen his doo-dah. Now, how to appease Deb, my long walk plans have been rumbled and only an iced cold beer will earn Brownie points before the walk back. I choose a sunny pitch at a bar on the promenade ordering two large beers.

Her Version – Bloody miles down the coastal road, our apartment was closer than this when nature made its call. I’ve now become the ‘Lucky Bag.’ Remember the Lucky Bag you used to buy from the corner shop, you know the one, a sealed paper bag containing a few bits of sweets and crap plastic toy, well, I’ve been known to be described as his Lucky Bag in the past. He’s not quite sure what he’s going to get every time I open my mouth but it’s almost guaranteed to be a moan of some sort.

Public toilet visited, pee on the seat, skid marks on the pan and no loo roll, so, after hovering, the emergency napkins out of my bag, stolen from a previous restaurant are used. No soap, sink full of sand where people have washed their feet, shoes and whatever else is covered in sand and a broken hand drier. Oh the joys of a public bog.

“Let’s have a sit in the sun and a drink” he says, another large beer to fill my ageing bladder, once the gates have been opened there’s no going back. He chooses the most expensive bar, 3€ a beer, the uncomfiest of seats and the noisiest, fag smoking German neighbours. The ambiance has gone, it was never there, my bum hurts and my ice cold beer appears to have huge mushed up bits of ice in it.

His Version – The beach stretches out before us in a sweeping arc of soft sand. We kick off our shoes and skip romantically hand in hand into its embrace. The sun’s reflections flicker like stars on the breaking surf as it kisses the land before us. We leave our footprints behind us, evidence of our romantic moment, to any that follow, clues of a couple taking a journey through life. Not a slim couple though, they are deep footprints. 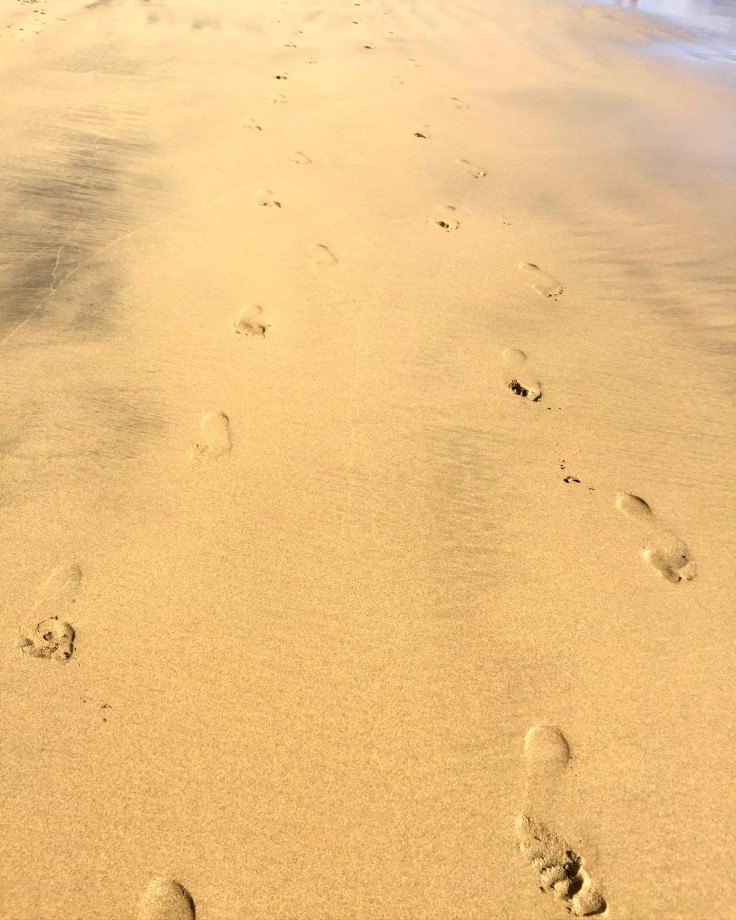 Her Version – FitFlops in hand, they don’t work either, previously mentioned two stone has been gained since purchasing them too, my feet touch the golden, blackened sand, this is a volcanic island remember. The sand is soft and dam hard to walk in, he marches ahead, right hand trailing behind him as though he expects me to catch him up let alone keep up his pace and hold his hand. Pissing, shitting and farting, (one of my favourite phrases), I have to yell to him to slow down. I hang onto his hand as he drags me squinting in the sun straight to the sea. The freezing cold sea gently laps on the sand, this is January remember, the sun might be warm but the sea is cold. Once acclimatised we paddle along at a pace of knots equivalent to the cargo ship heading out to sea. Back up the beach onto the soft golden, black sand my wet feet now resemble that of a five year old who has been playing barefoot in the mud. Oh the joys. I’ve got to try to clean it all off later. Walking on soft sand my pace slows, my hips are hurting, my bum cheeks feel like I’ve done a few hours at the gym, I’m sweating, knackered, thirsty and I need another wee.

His Version – Around the Island of Lanzarote you see many small ‘C’ shaped sheltered walls of volcanic rock, mostly to protect the Grapevines growing at ground level in the black volcanic earth, (Zocos). Also seen on the beaches to provide shelter from the constant Island winds and the subsequent sandblasting. I spy one ahead, how lovely after a romantic walk, a romantic sheltered moment watching the sea rolling in with our arms around each other. It didn’t quite have the desired effect though.

Her Version – Black crescent shaped walls, built out of volcanic rock line the final stretch of beach. We used to call them Dinosaur Nests, they have since been renamed. ‘Come on!’ He shouts back at me in the wind. My hair is stuck to the sun cream on my face. With the sun and wind battling to beat me down, I think he senses my mood and points to a Dinosaur Nest, time for a sit down out of the wind then I can pick the hair and sand from my face.

Tissues line the entrance, gingerly walking towards the volcanic, black nest, the walls are filled with what I am going to describe as ‘Love Wipes’ and crumpled beer cans. With the odd condom peaking it’s head out of the sand, pissing, shitting and farting can this walk get any worse. Dinosaur Nests, my arse, now renamed Shag Pits, we walk on thinking about all the Señors and Señoritas that have frequented said Shag Pit. 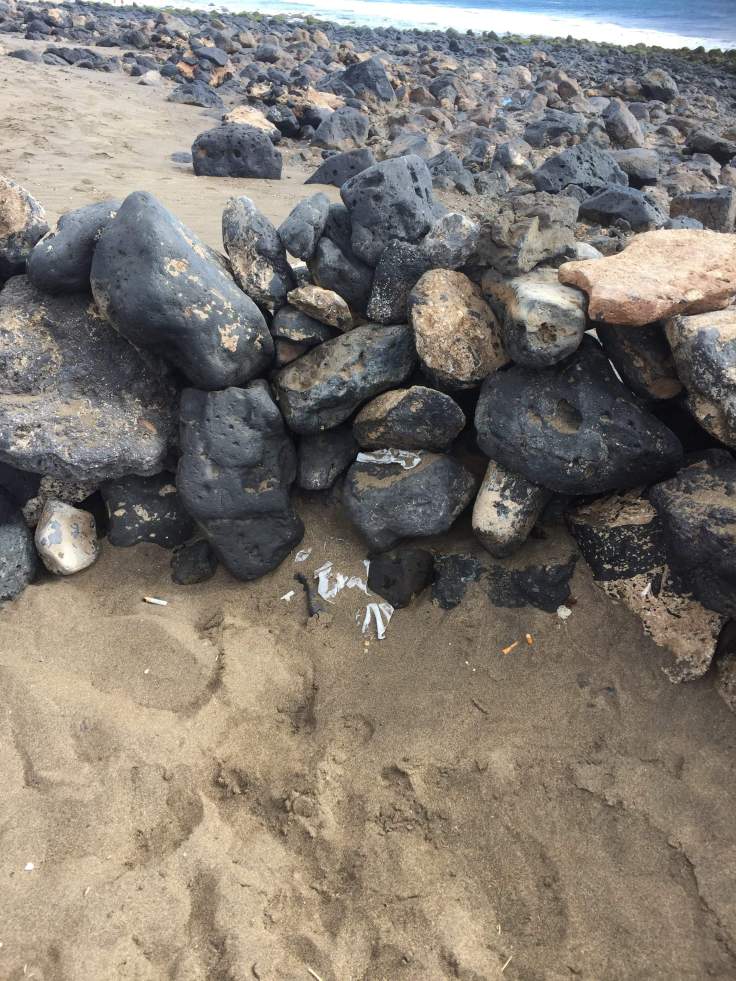 His Version – Thankfully, after walking four hundred yards past private beach hotels I spot a ‘gentle slope’ back to the promenade, avoiding a potential four hundred yards retreat back the way we came. Back on the prom, “That was a lovely walk, let’s do it again sometime”. She seems a little tired from our romantic walk, best take her out for a ‘Big Tea’ tonight.

Her Version – We plod on aimlessly past faceless all inclusive hotels, fronting onto the beach, wall to wall sun beds all behind prison like bars to stop riff raff like us getting in. The sand is now peppered with bits of broken stones and sea junk all of which seem to be lying in wait to stab at your feet. “Just up here!” He calls back into the wind pointing to a volcanic, black hill with a small castle type building on top. My little legs don’t do hills, let alone in baking hot sunshine and sand blasting wind. Pissing, shitting and farting, are we nearly there yet? 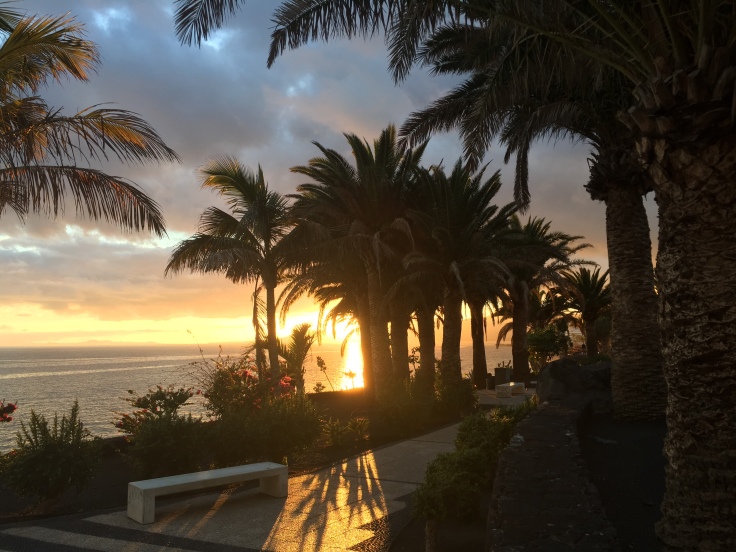 12 thoughts on “He Says, She Says on the Sea Shore”