Since The Boss sold my Focus the other week I’ve been forced to drive the Volvo. Not a happy bunny really, anyone who knows him knows that he hates spending money. Today, he had to dig deep into his pockets and pay to have the spring loaded start,stop button and key fixed. Many moons ago the spring loaded mechanism gave up the ghost and has given us no end of huffing and puffing trying to get the key out of the car and get it to lock. Eventually, The Boss got the knack of it and happily trundled along. Me? Without my blood pressure going through the roof trying to lock the blooming Silver Hearse, feeling unable to go anywhere which meant having to lock the car and leave it. I wasn’t going to drive it. In anticipation of my whinging, The Boss booked the hearse into the Volvo dealers in Southampton. This of course meant spending money. Something that doesn’t come naturally to him. Blowing the cobwebs off his wallet, the Volvo looks as though it’s finally going to be fixed. 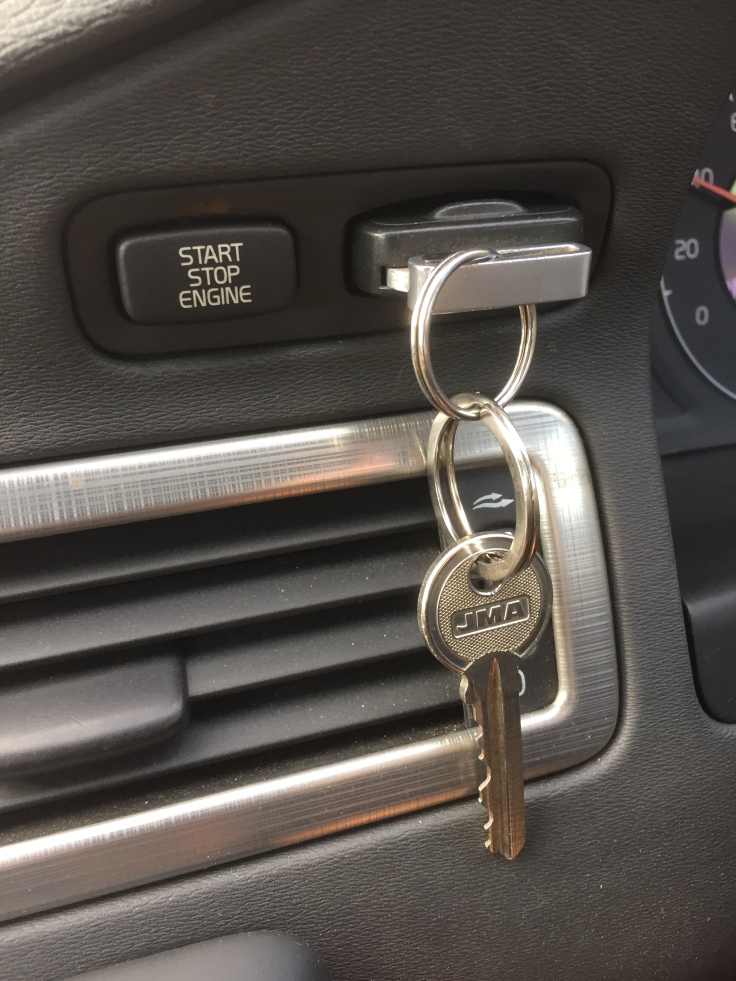 With the dealer being a good way out of town he’s decided we are going to catch a bus to kill time. Buses and me don’t mix. We squeeze ourselves into a blue double decker full of walking frames and prams. With standing room only we are squished in the middle of a rather nattily dressed elderly couple, a screaming toddler and two young, eightyish year old love birds holding hands and sitting closely together. Cough, sneeze, splutter, buses are mobile germ wagons. An automated voice tells us of an approaching stop, completely inaudible due to smoker’s coughs and hearing aids not being turned up enough. 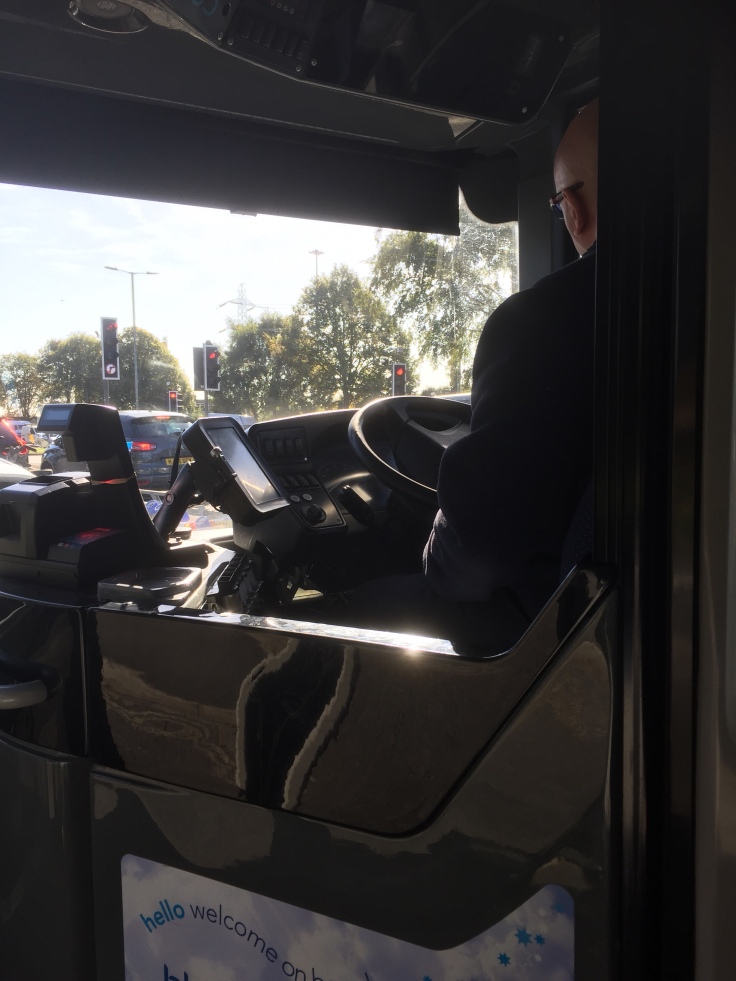 The door opens and releases us into fresh air, well as fresh as it can get on a busy main road outside of the Westquay Shopping Centre. Not a lover of shopping centres we head across the road towards the city wall. 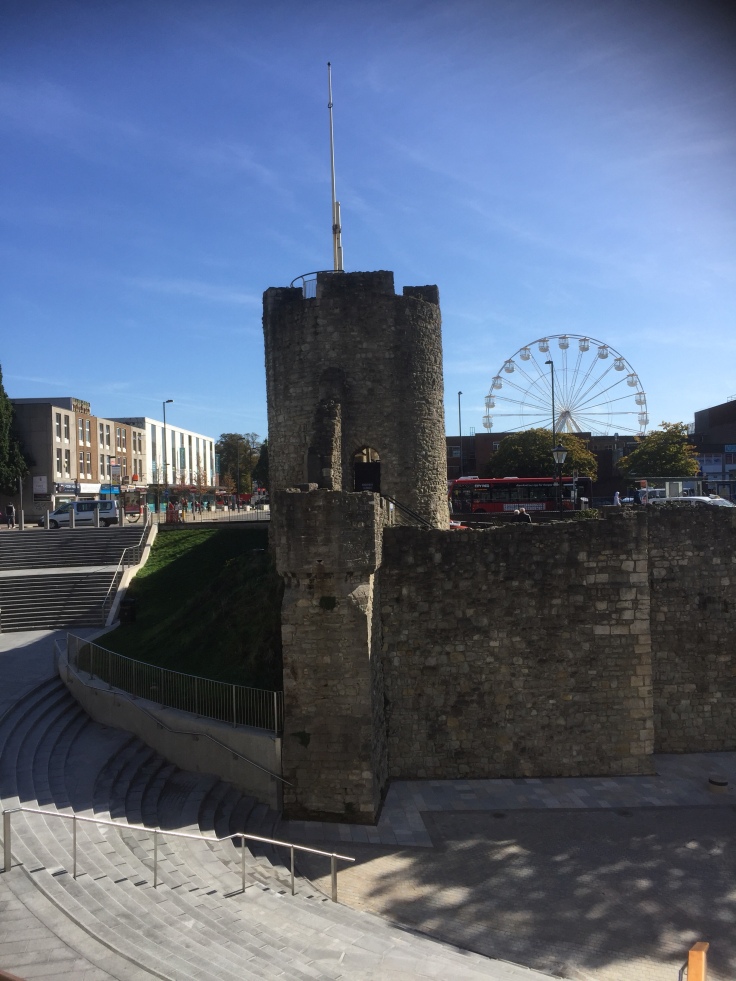 A fan of anything historical, The Boss immerses himself in the numerous plaques placed along the length and breadth of the wall. I read the first one or two plaques and start to loose interest as the many foreign tourists start to share the wall with us. Taking photos of every word and stone. With The Boss pouring slowly over the plaques, lost in translation, I amble along enjoying the mix of the old wall and new structures closest placed around it.

Modern buildings with wall remnants as features in their gardens. Beautiful, blue skies betray the chill in the air. Autumn is on its way, leaves are starting to change colour and fall. Sweatshirts are on but true Ludford style we’re both still wearing shorts. 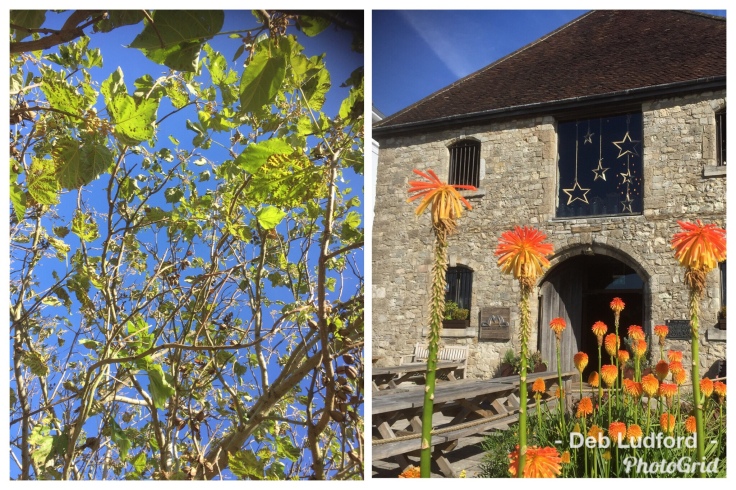 With the Southampton Wall Walk completed we walk some quirky alley ways towards the high street. 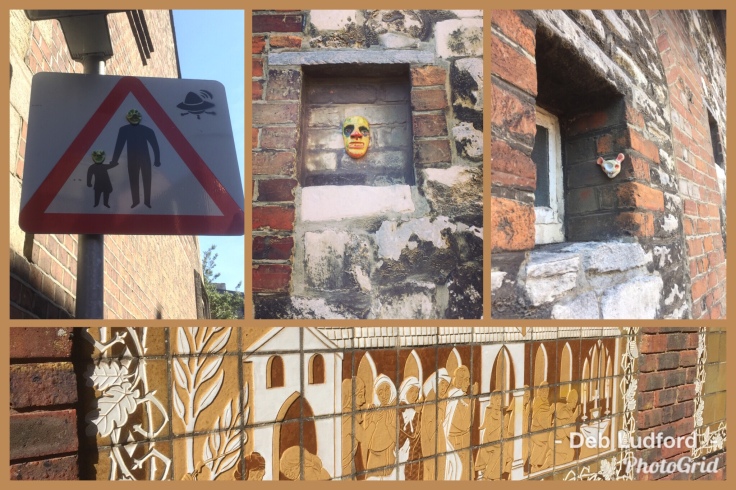 With beggars outside almost every doorway, holding their hands out asking for change, we walk briskly on. The Boss ain’t going to part with any of his hard earned coppers. Surprisingly, retracing our steps back down the high street, the beggars have gone, leaving behind, hats with pennies in, blankets and empty dog bowls. Quick look at my watch, just after twelve, they must all be on their lunch hour. 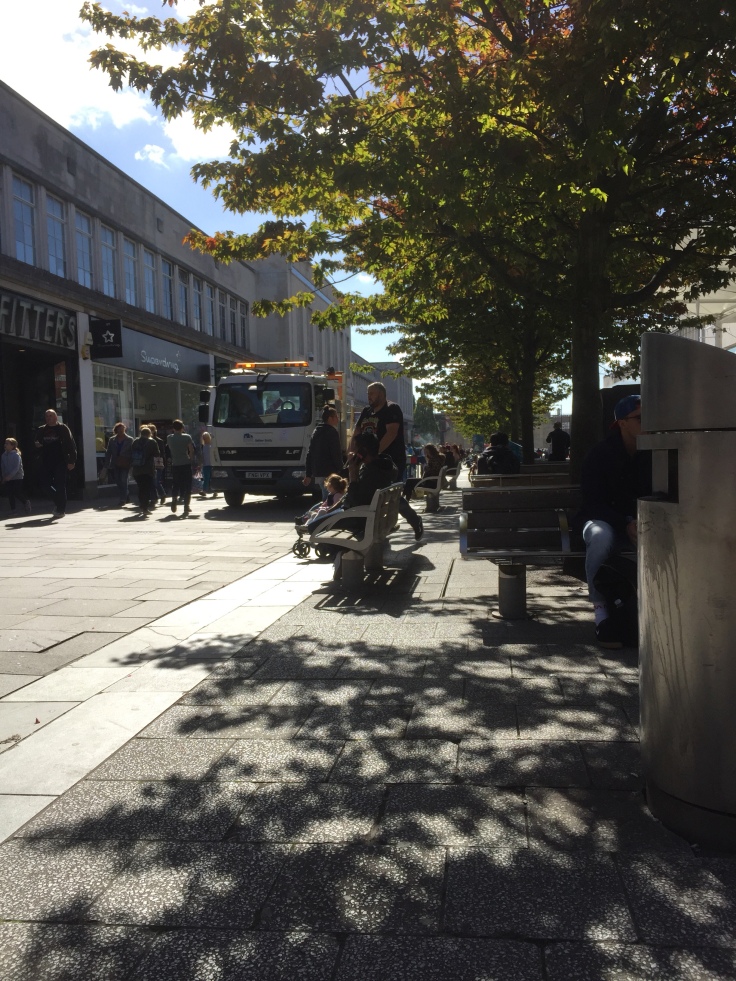 A strange noise, The Boss lifts his phone to his ear. He hates talking on the phone. It never rings. He never calls anyone. It’s the Volvo dealer, their parts delivery is late. The job is going to take a couple of hours longer than we anticipated. Flippin’ ‘eck.

Back to West Quay and we choose a pizza chain offering an all you can eat buffet lunch. With the potential of a good few hours to kill, we hunker down with pizza and refillable Diet Pepsi.

An hour and a half later the strange noise occurs again. Fingers crossed it’s good news. Can we please make our way back, the car will be ready for collection soon. Back onto the bus of germs, this time the clientele has changed slightly, we are now placing ourselves in the midst of snotty school children and young mums smelling of sweet, fruity vape.

Back at the dealer, keys handed over, plastic slipped into the machine, numbers punched in, painless payment. No more blood pressure raising moments as the car now actually locks.

2 thoughts on “Wall Walking and a Volvo Fix”