Bacon butties on a wet Thursday, day off, cooked on the teppanyaki and slathered in brown sauce. Sitting in the awning with the Jellybeans, they’re visiting again, and they fancied some New Forest sunshine for a few days. However, as with most half terms the weather has changed, cracking the flags last week, this week warm and wet with thunderstorms predicted for later.

Coats stashed in the Volvo, in preparation for whatever the heavens decide to throw at us, we head towards Bournemouth. Only half an hour or so down the road from the Centenary Site, Bournemouth has a flavour of ‘holidays’ that the Jellybeans are craving, sun, sea, sand and a promise of their favourite choice of eatery for tea.

The Volvo is bedded down in a rather new looking and reasonably priced multi storey car park. All the car parks we have encountered since moving to our new lifestyle have been extortionately priced, requiring a small mortgage or a significant lottery win.

Down on the front, the sea is but a myth. With an extremely bright sky, people sit on the beach despite the thick sea mist that has rolled in, enveloping only the sea and the beach. Standing on the prom leaning against the railings looking out towards the mist, it has an eerie feel. You can almost see Michael Jackson emerge dancing to Thriller. We move back inland before the sea monsters or zombies decide to leave the invisible ocean. Away from the chill of the mist we find ourselves guided by pathways towards Westover Gardens. The lingering smell of street food, as a couple of stalls pack away for the day mingles with the strumming of a nearby busker.

The sun beats down in the gardens despite the sea mist being less than a hop, skip and a jump away. A small gathering of children at the side of the stream that bisects the gardens catches our eye. The Jellybeans and myself are still kids at heart and our hearts melt when we see what they are looking at, Mummy and Daddy Duck trying to control a brood of ducklings. Although, Mummy does seem to be doing most of the work whilst Daddy bobs along gently at the back. A bench under a stream side tree provides not only shelter from the sun but also the local toilet for our feathered friends, or so it seems as we struggle to find clean timbers on which to park our bums.

Watching the world go by, it really is nice seeing public parks like this being used. Children play, couples languish in the sun, a small group of teenage boys cast glances at a group of giggling girls crowded around a phone whilst music pumps out of another phone. Students amble slowly along the path, eyes glued to the screen in their hands whilst earphones are well and truly jammed into their ears. Amongst the youth and their technology sit older ladies chatting over a takeaway coffee. All of them enjoying the moment in their own little way.

A young couple giggle as the man stands arms spread wide, hands flat offering seed to the birds that flap around him, the woman trying her best to get a photo. To the side of them, sitting quietly alone an older gentleman leans his arm on the backrest of the bench whilst resting his other hand on his carrier bag, almost protectively. Upon closer inspection, the gent is hand feeding squirrels with nuts from the carrier bag. They scamper up to him, ever so gently take the offered nut and run into the bushes to hide them for another day.

Who needs television when you can sit and people watch. Time to move on the Jellybeans’ tummies are still starting to rumble. Time to head towards food for us. Five Guys, an American style burger bar, recently discovered by ourselves but a favourite of the Jellybeans for quite a while. Imagine McDonalds but a far more superior burger and fries with milkshakes that you can apparently die for, or so I’m told. Their prices aren’t for the faint hearted but probably one of the best burgers you’ll ever taste. Order placed at the counter, the building of our evening meals begins. Whilst awaiting our delicacies, boxes overflowing with monkey nuts, sit waiting as a free appetiser whilst you await the culinary delights to come. I use ‘free’ quite loosely, this meal has cost an arm and a leg. The crown of the bun is piled high with various bits of salad, the burger is added, loaded with onions, bacon, cheese and mushrooms. The heel of the bun completes the delight just before it’s wrapped in foil and placed on a tray with our fries and drinks. It doesn’t look anything special but it is the best burger I’ve ever tasted. 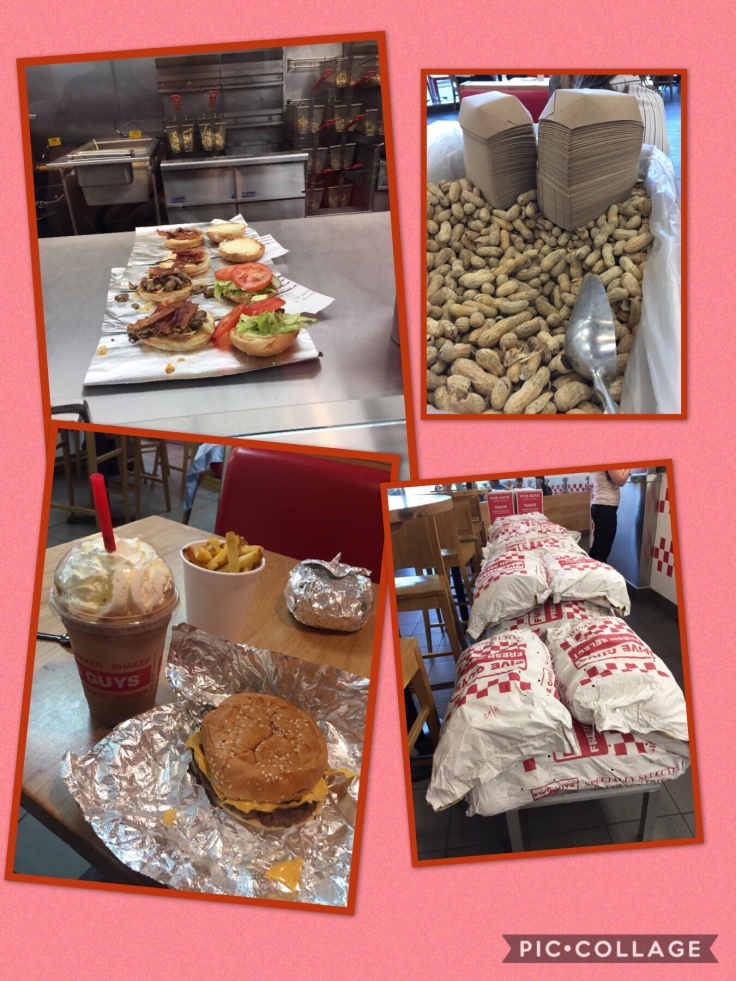 The drive back to the caravan finds us all complaining of food babies, seat belts stretched across full tummies. Boy, I really do need to go on a diet.

2 thoughts on “Bournemouth and Burgers”