A marathon journey, eight hours, no peage, and we’ve only done six inches on the map. One of the hottest days of the trip so far and I’ve been sat in the passenger seat with a French map book stuck to my knees having map reading lessons. I’ve no idea why I need to learn how to read a map, The Boss has an inbuilt Satnav, in his head. He now drives trucks for a living, he’s never ceased to amaze me though on his ability to navigate to and from places without the assistance of a map or satnav. After following careful instructions I still manage to doze off and have complete inability to find where we are on the map. ﻿

We arrive at the chosen site, very late, hoping they have a pitch. ACSI card held as ransom we are welcomed and told to find a pitch. More of our native language and familiar British number plates on this site. Being only three hours ish from the entrance to France from the UK it seems a popular first stop site on route to the rest of their adventures in Europe. For us, it’s our final stop. We decided a few weeks ago our last few days were going to be a little bit slower than the rest of the trip. Let’s see how we go shall we?

After such a hot day no sooner was the canopy up than the heavens opened. Everyone retreated indoors. We happily sat a while under the canopy grateful for the respite from the heat of the day.

A walk around Brionne the following morning led us eventually to a small Carrefour. Supplies for the final few days bought. After reading reviews and chatting to a guy onsite who sounded like Louis Theroux we decided to search out the local village. I should’ve paid more attention when he said, take a camera and wear good shoes. All downhill through woodland from the site, it’s ok I can do downhill, I just find it hard coming back up. 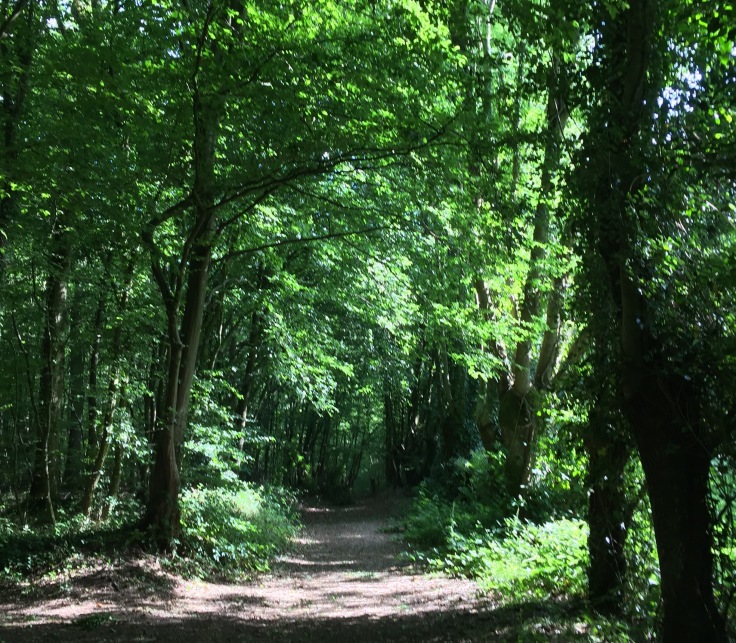 The path leads onto a road, turn immediately right and the breathtaking view of an olde world French village hits you, complete with the heady smell of flowers. Bells start to chime, the Abbey sits peacefully nestled to one side of the village. Picturesque from every angle and free to walk the grounds, a Monk locks the doors to the main church as we walk past and gives us a funny shrug of the shoulders as if to say “I’m not doing overtime tonight, so walk on”. Complete with bald head and white Monk robes he fit the scene perfectly. 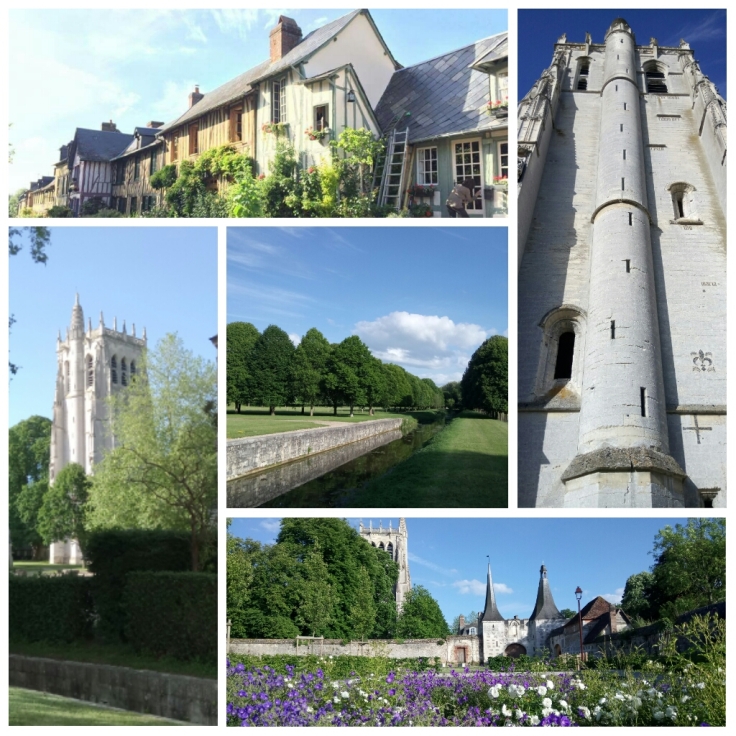 For the first time since Bruges, nearly seven weeks ago, we planned to revisit some places we had been to many years ago, namely, Deauville, Trouville and Honfleur. Picnic on the beach was planned at Deauville, so after feeding as many 10 cents into the parking meter as we could, we spent half the allotted time searching for loos that required a few 10 cents more. Got to get rid of all this copper we are carting around. A massive sandy beach, busy but not crowded, with perfect weather made for a pleasant hour before a brief walk to the port and back to the car.

We dumped the car on the outskirts of Honfleur and jumped on the tandem for the ride in. Another beautiful port town with distinctive tall narrow buildings all fronted by waterside bars/restaurants. Big cobbles and lots of folk made riding difficult so we parked up by the waters edge and people watched, just in time to see an old boy fall hard on the cobbles, typical man, to proud to sit in a heap, was instantly trying to bounce back up, we helped his wife to calm him and keep him seated but were unable to communicate any further. Clearly shaken, and well into his eighties, Pierre was still perched on a somewhat comfier chair for a long time after we moved on. We trundled along the harbour footpath under the gaze of the massive Pont du Normandie before returning towards the car, via two fountains that The Boss had spotted and rode the tandem straight through the middle of without any warning to the unsuspecting passenger on the back. Me! Now sopping wet. 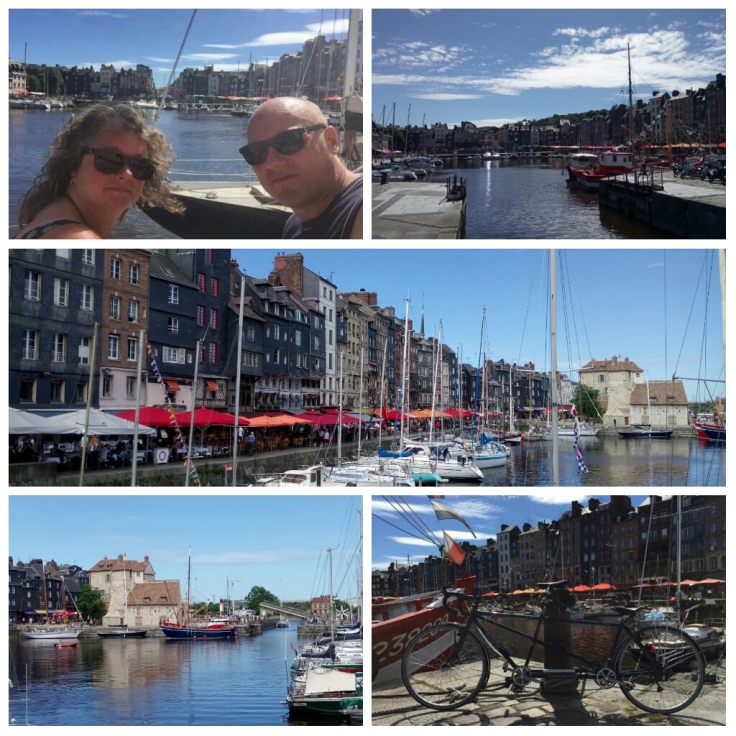 Another lazy day followed and thoughts started to turn to the homeward trip while working out supplies and currency required to see us back to the Channel Tunnel. We suddenly realised we had brought over £300 cash in Swiss Francs on the journey but never went to Switzerland as originally planned, but where was it? The whole caravan was turned upside down, twice, plus car, we both started to think it had been thrown in the bin when the Euros had been removed from the currency envelope. It turned up a whole day later mixed in with his underwear, he said that was obvious with hindsight, as all his valuable items are in his underwear.

The Boss doesn’t do lazy days as well as me, I could see he was itching to do something so I suggested a short ride on the bike from the site. I should know better, five minutes later we have descended a long hill, that can only mean one thing for later, and found yet another disused and resurfaced railway line which we are now whizzing along as he chases down every bike ahead. We exit the track at a 2km sign to Harcourt where he says there is a Chateau. 2km up a steep hill and we are catching a group ahead so he is ‘trying’. Only when we catch them do we realise one of the group is about four years old and amazingly climbing this steep hill, “Chapeau Monsieur” we shouted in our best ‘out of breath’ style. The Chateau cost money to get in so he lost interest in seeing it anymore and we turned back. The climb from the Abbey back to the campsite was, as expected, hard work,  but in total we had covered about fifteen miles in little over an hour. After a quick shower we returned to our lazy day and one satisfied Boss.

Two days left, oh no, we don’t want it to end. We thought about the Normandy beaches today but decided the distance was a bit too far, then Rouen, but having done both before took a pleasant thirty mile drive to Les Andelys and its history scarred English built castle set in a fabulous natural chalk cliff horseshoe on the River Seine. 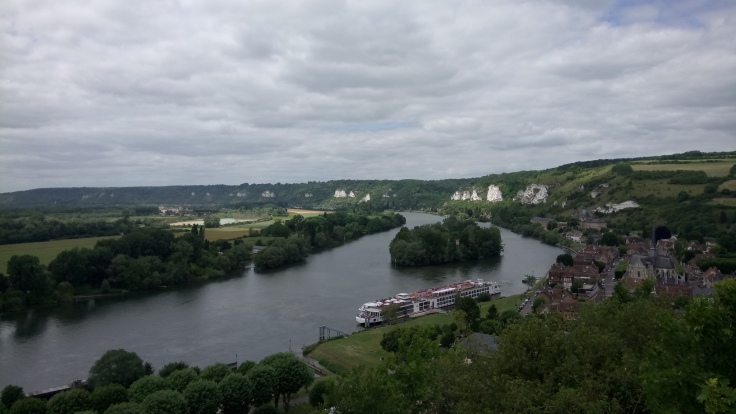 Once again he has me walking uphills, but I took solice in the complaints of dozens of River Cruise retired American tourists not expecting to be the latest ‘on foot’ invasion army of this rocky, steep castle …. “We are not going up there are we”… We will let you do the accent.

One last shop, butties for the drive home, chocolate,  crisps and wine to chase away our ‘end of tour’ blues and another splash of cheap juice in the Volvo.

Day 49. We venture nowhere, we start to pack some stuff to help an early departure tomorrow,  then we sit. We talk. We reminisce about some of the minor, quirky or weird moments on this trip and they feel so long ago, we have experienced so much and it has been amazing.

So come on Day 50, do your worst and take us home, we will sit on that train and start thinking “What Next?”

For a review of the site we stayed on, click HERE

3 thoughts on “Last days of the trip”