Gutted really, our front caravan window here at Brighton Caravan Club site is looking out towards Whitehawk FC’s pitch and I had mentally made an appointment to attend Saturday’s match versus Hemel Hempstead in England’s 6th tier of league football. If you follow or have stumbled upon this blog page before you have probably already realised this is ‘The Boss’ writing, please note I am barely the boss of tying my own shoelaces but as with many other husbands I am bestowed this title so I am responsible when things hit the fan. 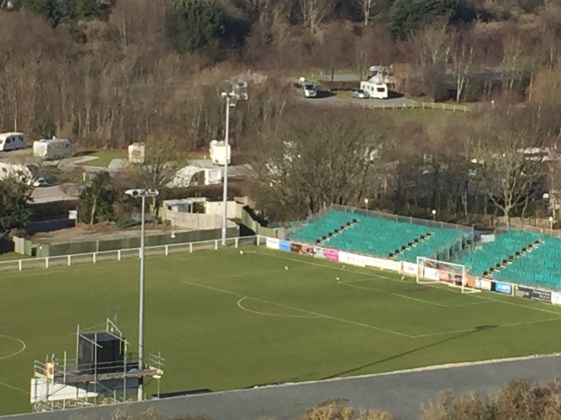 But no, disaster, overnight temperatures below freezing saw the dreaded P v P against this game on the fixture lists to inform me my appointment was postponed. So I sat in caravan with my sulky face on. Approx 2pm familiar sounds were creeping through the roof vent, football sounds, there was some form of local football taking place on the fields next door to the site. So, conforming to a 70’s stereotype I announced “I’m off t’match” while ‘Er indoors’ could make herself pretty, could she be any prettier, and cook up a sumptuous meal to be served as soon as I return.  Or maybe she will just open the wine, tweet, Facebook, blog and sleep!

To be honest, I have fallen out of love with football, how did I go from watching my team both home and away, every match, to now thinking it is 22 men running around after a bag of air. As I walk onto the fields there are four matches on offer, it appears by kit colours that each one is the same fixture, I realise it is schools football and assume the teams playing in the same colours as the coloured goal nets must be Brighton College, plus the sign at the gate helped. I headed for the match with the tallest kids on the basis that tall kids = oldest kids = better level of quality. Within minutes the ball was sent down the right wing where it was collected at full speed as this lad, that I just assumed would run it all the way into the penalty box, slipped the ball slightly to the left then curled a wonderful shot from outside the box into the top right hand corner of the goal. It gives me the opportunity to ask the fellow to my left the score and who’s actually playing. It turns out to be Brighton College U14s v Christ’s Hospital U14s and the score is currently 1-1.

The fellow to my left is the father of the away team goalkeeper who luckily for me was performing superbly, it would have been very uncomfortable if he was having a stinker once the association had been made. The conversation that followed was as enjoyable as the match, which, including the expected level of hoofing and booting did also have some glimpses of real skill, a number of quality goals and ended 3-4 in favour of the visitors, so, one happy Dad. I realised it’s not football I have fallen out of love with, it’s the modern silky smooth, slick, satellite subscription game I don’t like and I long for the days I remember at Gigg Lane, Bury, when the players would have a laugh with the spectators, the grass was muddy and you took your own flask and tin foiled meat pie for half time, I was even presented with a ‘hot berry’ drink today, as an honorary away fan.

When I first thought to write a football blog I had ideas to rekindle many memories from the 70s and early 80s but I guess football fans of a certain age will have many such memories of their own.  So I will leave you with a memory and a quote.

1980 I was in the away end at Anfield for Liverpool v Portsmouth (my birth town). In the years following the 1978 Argentina World Cup some supporters were still copying the ticker tape greeting as the teams entered the field. The guy in front of us had spent 6 long hours travelling north tearing up newspapers for the big entrance and suddenly announced “I’ve left all the paper on the train” … pauses for a few seconds … “Oh F…It, I’ll throw my sandwiches instead” … and he did.

“I wouldn’t say I was the best manager in the business. But I was in the top one” – Brian Clough.