With our house on the market for sale and a few jobs to do, The Boss decided to use our free time before Christmas to do a bit of touching up here and there. I took this as my leave to do a bit of shopping, that way I don’t have to listen to his stressing and cursing, everything’s a drama.

Ten minutes later, drama. A text telling me to get back home pronto. It seems our roof has been leaking, soaking into the built in wardrobe and starting to soak into the plasterboard ceiling. The wardrobe holds a lifetime’s possessions belonging to Jellybean No.2 and that is now being deposited everywhere so he can get the wardrobe out. After two hours unscrewing and unbolting, the wardrobe is out of the roof space. It is now that we see a roof joist dripping and soaked with rain water. Oh Joy … and in two days we are going away for a Christmas cottage break.

Nine years ago we arranged to smother our roof in solar panels, with the help of some insane incentives from the local council and generous ongoing tariffs courtesy of the Electric Board (ie. the general public through their bills). Our neighbours loved them, “Looks like a bloody space ship has landed” one of them remarked, oh how we laughed. As the sun shone we smugly made “ker-ching’ noises to ourselves and the money rolled in. Now? Water is getting in, the installers have gone bust, roofers can’t fix the roof until the panels are removed first, meaning, uninstall panels with one company, fix roof with another, then, reinstall the panels again, potentially needing their own scaffolding each time. What’s the opposite of smug? 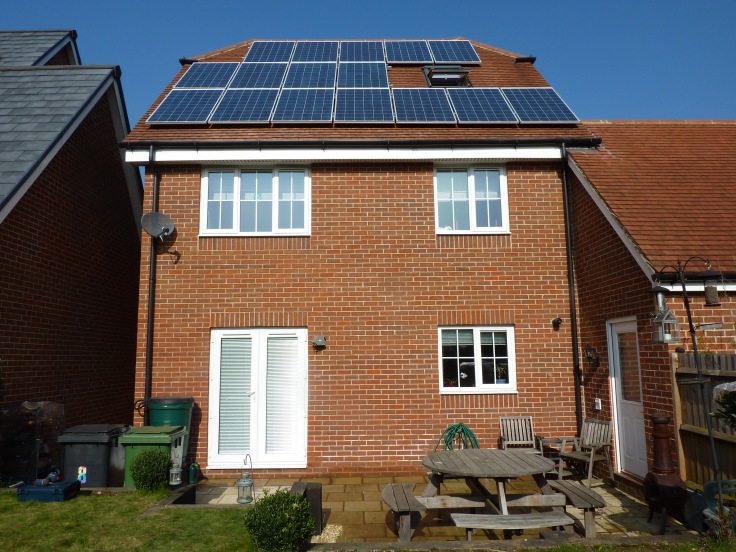 We managed to get a roofer to the house just before we set of for our Shropshire Christmas break. He confirmed the uninstall, repair, reinstall scenario … we made a snap decision … “If we get them disconnected from the electrical system will you take them off?” The panels have paid for themselves and prospective buyers have not been wetting themselves with excitement about them, so we may as well take the cheapest option. “Next week?” we ask optimistically, “Nah, will be middle of January at the earliest”. Damnit, we will be away in Lanzarote, now wishing we could cancel both the Shropshire and Lanzarote trips, not least because that money would have helped, oh hindsight, where are you when we most need you?

On route to Shropshire another issue started to rear it’s head, this one The Boss has been trying to ignore for two years. The Volvo cuts out due to some sort of fuel starvation, we have got used to the sudden ‘jerk’, (that’s The Volvo, not The Boss) and after diagnosis from the garage identifying ‘Swirl Flaps’ as the problem they had mutually agreed some cheap workarounds and “See how it goes”. Well, it’s not going well … we make a snap decision … “This could cost upwards of a ‘Grand’ to fix, we can’t afford to change the car, we have to get it done”. Two weeks later while on a visit to Brighton the car cuts out completely at two sets of lights, first one a ‘hazard light’ job as we rolled backwards to clear the lights, before The Boss got out his ‘Jiggle Stick’ (no…not what you’re thinking), a biro with a cable tie loop to jiggle the Swirl Flap Actuator. The second time was cured by a full speed, third gear bump start, we really have to get it done. 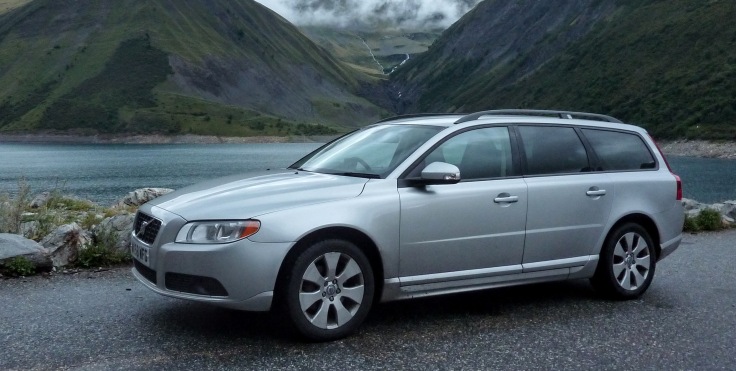 If it’s true that bad luck comes in threes, then the phone call we received in Brighton suggests we are done now. “Mum, Dad, the water is freezing, the radiators are OK but not the water”. Good grief. The Boss was hoping everything was cold as he’s learnt a few tricks to restart the boiler, but this one threw him. He starts Googling then a whole series of ‘Facetime’ conversations with the Jellybeans follows saying “Try this, try that, what’s happening”. We are home tomorrow, but we know the Jellybeans won’t be in the best of moods as they cold shower before going to work … we make a snap decision … this has to be fixed tomorrow at all costs.

Leaking roof, unreliable car, cold water, unhappy Jellybeans … we are fed up. We are also looking at upwards of £3000 to £4000 in costs. Let’s look in the bank account for that then … Ahh, nothing in there that’s going to help. 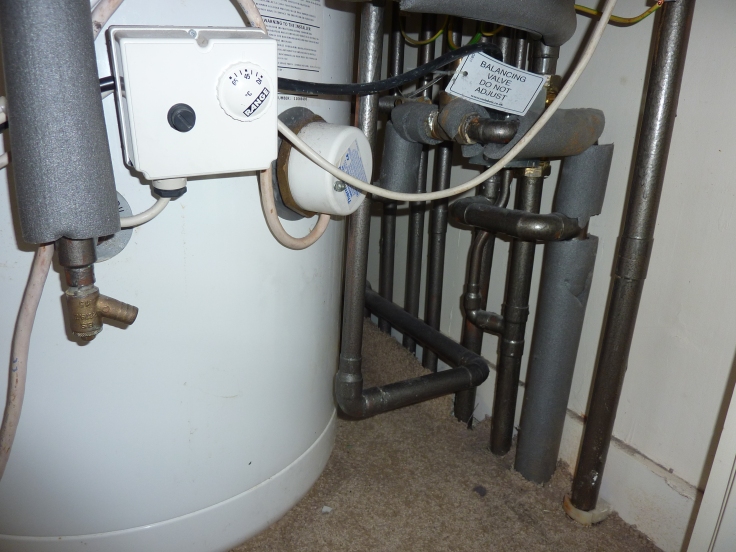 Next day we are home, he is in the airing cupboard before he’s took his coat off. A few minutes later he suspects he knows the problem and works out a way to trick hot water into manually reaching the tank. A phone call to our friend Mark, a plumber ‘overseas’, for a second opinion and he orders a part online, plus £8 postage to get ‘next day delivery’. It arrives next day … and it bloody well works, he is relieved, delighted and smug in equal measure, this disaster has only cost £90 to fix … the quote for the roof repair comes in just below £2000 and he makes the phone call to the garage to say “It’s time”, he hears the sharp intake of breath down the line…

An electrician is sourced, at a cost of £100 to disconnect the solar panels and remove the associated bits and bobs within the house. An idea forms, “This stuff could sell on eBay to help recoup the costs”, and so it did, £100 received for the bits and bobs. As it is collected … we make a snap decision … “Don’t suppose you are interested in the solar panels when they come off, are you?”. “Well yes, I would be actually”. He offers £550 for the lot, a snip at £35 each, these are typically listed at £45 each on eBay but seemed to be ‘watched’ rather than ‘sold’. £550 guaranteed or hope for £700 on eBay (less £70 fees). We let him sweat for a day hoping he’d ‘raise’ then capitulated and did the deal at £550. What else can we sell?

Massive snap decisions follow. Our Isabella caravan awning is listed on eBay for 99p. We describe it as honestly as we can, explaining the leaking roof during the season. We hope for £10 or £20 to avoid us taking it to the tip, it sells for £200. Suddenly we are scouring the house for things to sell, our Hi-Fi separates and speakers, ornaments, bike racks, clothing and … eventually … his bike. The Boss’ bike represents more than the sum of it’s parts, it was the culmination of four years effort losing 30kg in weight then progression into Time Trial racing at a decent standard including once lining up alongside an Olympic gold medallist. The bike sells for £1000. Four years effort to pay half the bill repairing roof damage caused by some bozo in a matter of minutes. He is nearly in tears as it is collected and only lets it go when the new owner promises to look after it. subnote: After putting half the weight back on he could do with buying a bike, not selling one. 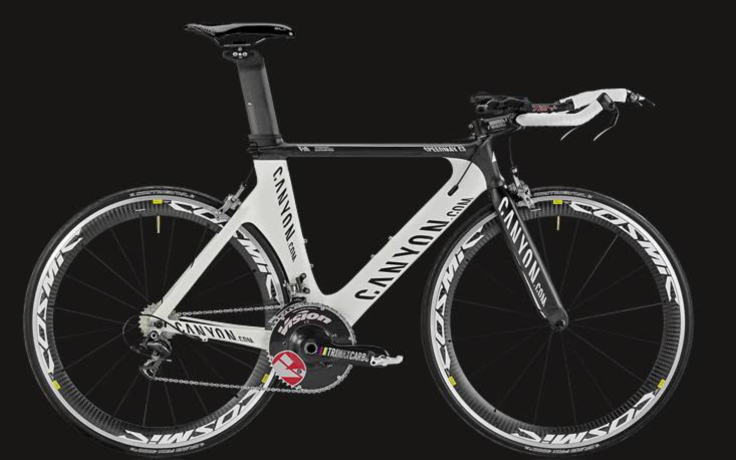 Next morning he drives The Volvo to the garage. This time it’s deep intakes of breath by him, rather than the garage, as he recovers from the walk back home, he swears they keep moving further away from our house. Four hours later the phone rings, a blessed relief as he’s pacing up and down like an expectant Father. “What do you want your Break Horse Power and Torque increasing to?” “Eh, what are you on about, I just want a car that doesn’t break down”. It seems that a solution lies in re-mapping the engine which in turn will sort out (ie. trick them) the Swirl Flaps as well as increasing power. He’s dubious but agrees to the ‘moderate’ increase which is done by the end of the day. £370 and it has been running beautifully ever since, if we get two more years we will be happy enough.

As it stands, we are absorbing vitamin D by the bucket load on a sun bed in Lanzarote, it’s 20°C in the shade and the minor ‘wins’ we have had so far with our ‘mini crisis’ are enough to allow us to relax … and relax we will. The Roofer comes next week and hopefully the panels will sell as agreed. We reckon we only need to find another £300 and we have recouped our losses. Watch out eBay, here we come.

11 thoughts on “Selling Out of a Crisis”