The Boss recently celebrated hitting the big 50, one of his gifts off the girls was a trip on the London Duck Tour. Having been regular visitors to London in our 10 years of living in the South, we hoped that this would show us London through fresh eyes. 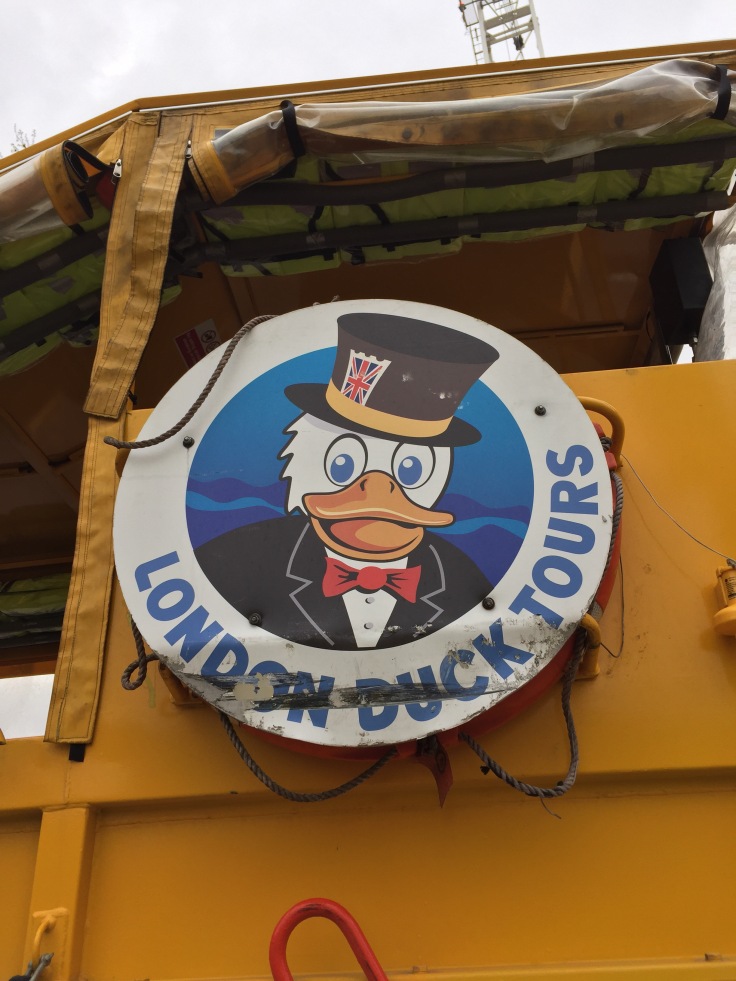 After alighting our train at Waterloo it’s a quick hop, skip and a jump to Belvedere Rd SE1 near the London Eye where the Duck awaits us. Greeted by a lovely guy who confirms our booking we are allowed to board. He told us that the seats with the best view in the house were on the left in the middle. Being the first ones to board we headed straight for them. You board the vehicle by a small staircase at the rear. With no onboard toilet it’s best to make sure all calls of nature are made before you board as the tour takes approximately 75 minutes in total. 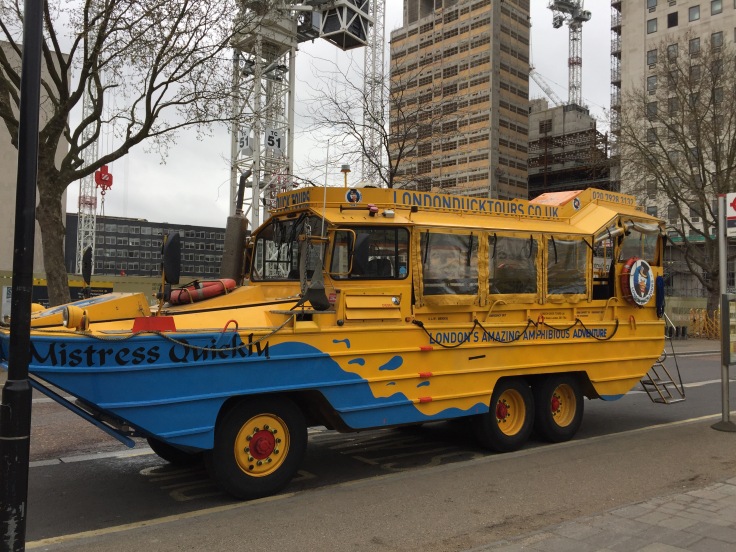 The Ducks, all named after Shakespearean characters, were originally used in the Second World War and have been completely rebuilt and modified to fit with today’s safety regulations set by the road and river authorities. Before we set off housekeeping is done, life vests pointed out and demonstrated how to use them. We were also told that if we happened to see another Duck it was polite to shout ‘Quack Quack!’ to them. To my dismay we didn’t see another Duck on the tour.

All tours are commentated in English and we were lucky enough to have Ben, a young guy, English by birth and brought up in New Zealand. His knowledge of the city and it’s history was delivered with articulate confidence and humour. All the expected landmarks were pointed out, each with its own interesting facts. It’s illegal to die in the Houses of Parliament and “If the lions drink London will sink.” The oldest hat shop and the most expensive shoe shop and exclusive hotels all added to Ben’s excellent repertoire.

At the entrance to the river our driver was swapped for a Captain, another Ben. Ben 2 expertly drove the Duck into the water and we became a boat. The commentary continued in the 30 or so minutes we had on the water. Pointing out and describing things you wouldn’t have seen from the banks, again with added humour.

Back on dry land and the tour comes to an end all too quickly. Back were we started and it’s time to leave.  Just before we left Ben pointed out an underpass, Leake Street, and said that if we had time it was well worth a visit. The only legal place you can graffiti in London. Of course after the tour we just had to wander down there for a nosey and we’re glad that we did.

At £28 per person with a concession price also available I’d say it’s excellent value for money and the perfect way to see all the sights in London. The novelty of being in a vehicle of such historical background that is designed for the road but also amphibious just adds to the quirkiness of the tour. The crew made the tour interesting, factual and funny topping the whole experience off. Never been to London before or like us, thought we’d seen it all before then this tour is perfect for you.