We describe ourselves as a tandem riding couple, to be truthful, although we have pedalled over 2000 miles of UK and European Tarmac, ‘Louis’ our tandem, named after the chimp in the PG Tips “can you ride tandem?” advert, has effectively been a clothes horse in the garage this last 12 months. 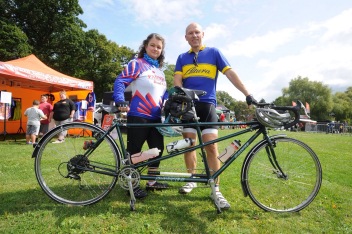 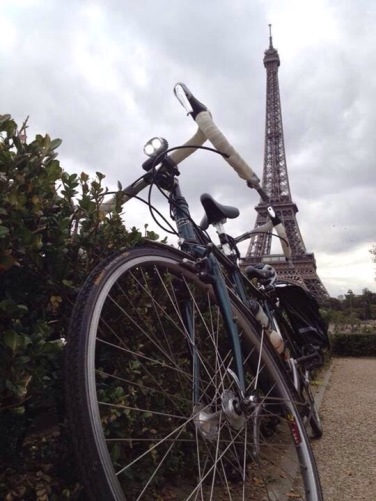 The reason, a downward cycle (!) of lost motivation, gained weight, lost fitness, kit no longer fits (even Lycra has its limits), too cold, too wet, lost motivation, gained weight and so on … and so on. Even if Deb was up for it, the tandem is useless without someone up front steering it.  So why the downturn? When I worked 9-5 (Steve writing) I rode a bike like I did my job, I researched it, planned it, tracked it, analysed it, set targets and goals then spent ages looking at numbers. I rode over 100 miles per week with similar middle aged well paid execs, cycling is the new golf, while we generally clogged up the lanes of Surrey and Hampshire much to the annoyance of the local 4×4 brigade. I had an obsession with achieving a 25 mile time trial in under 1 hour, it took 3 years of planning, tracking, analysing, not to mention sweat, but I eventually did it .. 59:37 on a Saturday morning on the A31 … a life highlight … a bad mistake too.

Cycling hurts, it never gets easier – you just get faster, I had achieved my target and without another target I lost the willpower to ‘hurt’ so much. Giving up the 9-5 didn’t help the cycling, moving from the office to return to HGV driving meant physical work leaving me too tired to get the bike out, plus the urge to thrash 8 hours of office stress down the A31 on two wheels disappeared too. The result, in only 3 years I’ve gained over 3st in weight, I look at my wardrobe rather than wear it and my muscles are withering away. For our health alone ‘on yer bike’ should be wise words indeed.

Louis the Tandem will be joining us on our 50 day European Caravan trip that is now only a matter of weeks away, he will get us into and around the Cities and Towns and hopefully through glorious scenery where a walk would be too short.

In the last couple of weeks I have started to ride again, but this time it’s for the love of it and remembering what it was that got me hooked in the first place. Computers and GPS gadgets no longer sit on the handlebars, I still track my ride but it is on my phone and sits in my back pocket, I don’t know where I am heading, I ride lanes I know well near home or if away in caravan, like this week in New Forest, I just get lost and hope to ride a route that puts me back where I started.

Today’s route was perfect, I estimated 14 miles and ended up enjoying 25 miles, it took way longer than 1 hour but I didn’t care, resisting the urge to make machine gun noises as I traversed numerous cattle grids was the only limitation I put on my enjoyment. I’m on my winter bike, another throw back to when we had money, when you could never have enough bikes, there is even a scientific formula for the number of bikes you should own, x+1, y-1, ‘x’ being the quantity you currently own and ‘y’ being the quantity where your other half throws you out on the street. A final thought for my new regime, my disregard for any planning did present one problem, my water bottles remained in the caravan for the whole 25 miles.

7 thoughts on “On yer bike”